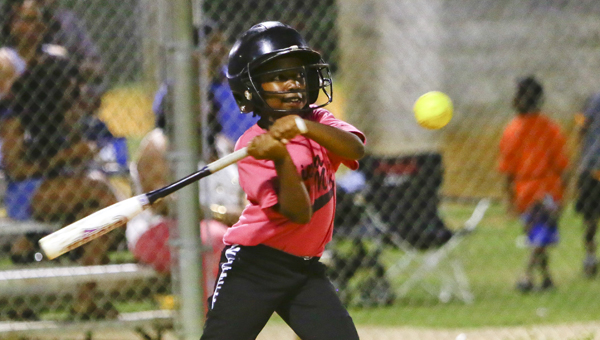 The victors defeated Trustmark 14-9 to remain undefeated on the season.

“Good effort to go unbeaten the whole year,” Pernell said. “It was a good game. It came down to the last go-round. We started out kind of rough with the game being close, but after a while we picked it up. Our guys came through. We played good and it was an undefeated season.”

R. Williams got things started for Steve Lane after he knocked in J. Beal to cap off an early 6-0 lead in the first inning. Trustmark battled back in the bottom of the first. Sammy Jackson put them on the board with an early home run to start the inning and Thomas Clay Atchison plated Joseph Bolen and Patrick Johnson to tie things up 6-6.

“A year makes a huge difference,” said Trustmark head coach Tommy Atchison. “We went 11-3 as opposed to only winning three games last year. Our parents and coaches were all supportive. It was just a lot of fun.”

Steve Lane clutched the lead once again in the top of the second with a three-run homerun by V. Eaton and an RBI-single from C. Curtis to extend their lead to 11-6.

Trustmark appeared to be making a comeback in the bottom of the third scoring two more runs, but Steve Lane left no chance for their opponents to come back  after D. Smith plated a run and Omari Smith hit a two-run homer to make it 14-8 in the fourth. Steve Lane then held Trustmark to only one run in the final inning.

“The kids were so much fun,” Atchison said. “They loved coming out here playing and practicing. They were just a joy to be around. They played hard.”

Greg Tillman State Farm got the bats going in the bottom of the third inning scoring three runs to cap off a 9-3 victory over First Avenue Cleaners and win the 11-15 year-old girls championship Thursday night.

“The only loss First Avenue had all season was against us,” said State Farm head coach Chris Horton. “We knew coming in it was going to be a tough ballgame. We’re an undefeated team and had a perfect season. They haven’t lost a ballgame all season. They are a great group of girls. Best all-around group of athletes I’ve ever taught from top to bottom. Normally you got some weak links toward the bottom, but I didn’t have those.”

State Farm’s Shelby Boswell picked up the victory after striking out 11 batters.

First Avenue Cleaners struck first as two of its players stole third off failed pick attempts and scored off a wild pitch and wild throw to home plate in the first inning.

“We just didn’t play hard,” said First Avenue Cleaners head coach Walter Reeves. “We should have played hard, but we fell off. We had a good season, but it seems like we just fell apart right here at the end.”

Hannah Averitt capped the inning off with a two-run double to improve the victors’ lead to 5-2 in the bottom of the second.

Ashley Horton, Kenzie Horton and Alyssa Uerhoff together knocked in four more runs in the bottom of the third to seal the 9-3 victory.

“We faced a pitcher we hadn’t faced since the beginning of the season,” Horton said. “We had a little trouble getting adjusted to her. The bats woke up and they have hit great all year.”