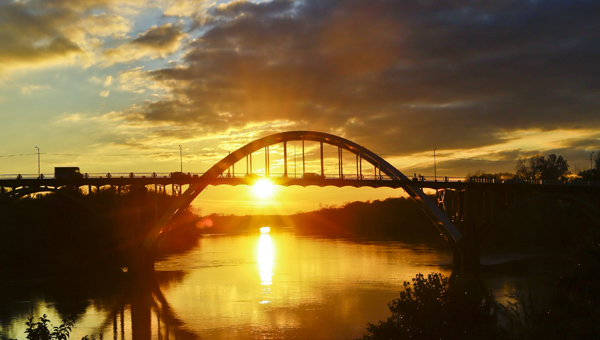 A resolution was passed Wednesday in the Alabama Senate that would renamed the Edmund Pettus Bridge.

Half a century after civil rights activists marched across the Edmund Pettus Bridge, the name of the National Historic Landmark could be changed.

The Alabama Senate passed a resolution Wednesday asking for the bridge to be renamed the Journey to Freedom Bridge.

“As the 50th anniversary drew near, information began to circulate more and more about the fact that the bridge was actually named after a person who was a grand dragon of the Ku Klux Klan,” State Sen. Hank Sanders said Wednesday. “There have been ongoing discussions and debates about whether the name should be changed for months now, and different people started getting petitions asking that the name be changed.”

The resolution now goes to the Alabama House of Representatives. If approved there, it would then go to Gov. Robert Bentley for his signature.

The resolution reads in part, “Removing this vestige of the past will serve as a parallel to the ongoing journey toward equal rights, fair representation and open opportunity.”

“I think it is not only appropriate but right that the bridge be renamed for freedom,” Sanders said. “I think that the bridge is a symbol, but each time you lift that symbol you’re also lifting a person who was a grand dragon of the Ku Klux Klan.”

The bridge is Selma’s most notable landmark, but its KKK association has drawn the ire of some in the majority black city.

The bridge became a symbol of the fight for voting rights in 1965. It was the site of Bloody Sunday, when peaceful protestors were attacked by Alabama State Troopers and Dallas County sheriff’s deputies on March 8, 1965. A few weeks later, Dr. Martin Luther King Jr. led the successful Selma to Montgomery march, which started on the bridge.

The events served as catalysts for the Voting Rights Act of 1965, which was passed in August of that year.

President Barack Obama spoke from the foot of the bridge this March, marking the 50th anniversary of Bloody Sunday. More than 100,000 participated in a commemorative march across the bridge the following day.

The resolution refers to a petition that was started by Students UNITE on change.org three months ago, which has more than 180,000 signatures from across the country.

However, Selma Mayor George Evans said he feels like the people of Selma and Dallas County were left out of the process.

“We’re all taxpayers in the county and the city, and they cross that bridge going back and forth. Why weren’t they given the opportunity for input,” Evans asked Wednesday. “I know that the name of the bridge is controversial, but at the end of the day it is history. I just wish the citizens of Selma could have voiced their concerns.”

Evans said he would have liked to see input from community members on what the bridge should be named.

“I’m sure there would have been some turmoil over what it would be named, but that is something I would have loved to ask the citizens,” Evans said.

Sheryl Smedley, the executive director for the Selma and Dallas County Chamber of Commerce, said the name change would have an impact on marketing.

“I would hope that they appropriate funds to us to be able to continue to market the monument because all of the materials that we have all over the state and the country, especially in the past year,” Smedley said. “Everything that has been written about it references it as the Edmund Pettus Bridge, so a lot of marketing efforts would have to be made.”

U.S. Congressman John Lewis from Georgia led the Bloody Sunday march as a 25-year-old student. He said the decision to change the bridge’s name or not is up to the people of Alabama. He said changing the name wouldn’t affect the history made on the bridge.

“I understand why the people of Alabama might want to change the name of the bridge. To me, the Edmund Pettus name represents the truth of the American story. You can change the name of the bridge but you cannot change the facts of history,” Lewis said. “As Americans, we need to learn the unvarnished truth about what happened in Selma during the struggle for voting rights and put all the facts on the table. That is the top priority, whether the name is changed or not. In the end, however, this is not my decision. It is a decision the people of Alabama must make. I accept whatever they decide.”

Selma native and current U.S. Rep. Terri Sewell said she is opposed to the name change, saying the move would change history.

“I am strongly opposed to changing the name of the Edmund Pettus Bridge. The historical irony is an integral part of the complicated history of Selma — a city known for its pivotal role in Civil War and Civil Rights,” Sewell said. “The bridge is an iconic symbol of the struggle for voting rights in America, and its name is as significant as its imposing structure. Changing the name of the bridge would change the course history and compromise the historical integrity of the voting rights movement.”

According to the National Park Service, the property owner, which is the state of Alabama, has the right to change the name of the bridge.

Stauffenberg said the name change would likely not have an impact on the bridges status as a landmark.

“In this case, renaming the bridge will not affect its status as a NHL or NRHP,” Stauffenberg said. “The National Park Service, which administers the NRHP and NHL programs, would work with the property owner and Alabama’s State Historic Preservation Office to update the name of the property in the program files.”

Selma Rep. Darrio Melton could not be reached for comment Wednesday afternoon.

Editor Justin Averette and The Associated Press contributed to this report.