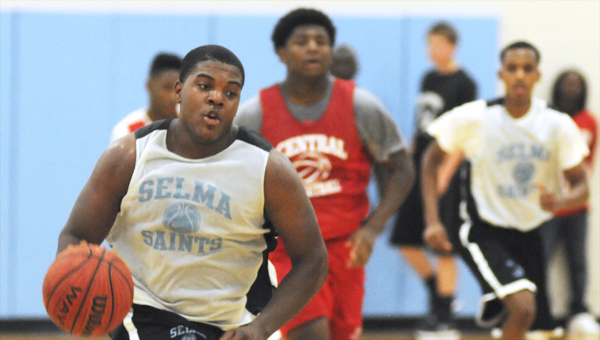 Selma’s Aderick Moore dribbles the ball down the court while teammates and defenders from Central Tuscaloosa trail behind. The Saints won their first two games against Prattville and Central Tuscaloosa but fell to Hoover in their final game of the evening.–Daniel Evans

It was the kind of matchup that likely would’ve filled the bleachers at Selma High School to the highest row had it been the fall. Instead, Hoover and Selma played the final game of the Saints’ 16-team boys basketball playdate in front of a mostly empty gym Tuesday evening.

The Saints, who entered the game riding high after two wins earlier in the day, found life a bit tougher against the defending 7A state champions. Hoover wasn’t flashy but the Buccaneers were methodical and that was enough for a 56-37 win.

“We weren’t satisfied with the way that we played against them and we know what we have to do next time when we play a team of that magnitude,” Jackson said.

Jackson said he hasn’t been able to get his entire team together many times this offseason and he guessed that Hoover hasn’t missed a practice.

The Buccaneers led 31-18 at halftime and quickly pulled away in the second half.

It wasn’t all bad for Selma though.

The Saints won their opening game of the day against Central Tuscaloosa in overtime. The game was tied with 2.4 seconds left, but Quentavious Davis beat the buzzer on a turnaround three-pointer to give Selma a 40-37 win.

“It just builds confidence…,” Jackson said. “We’ve been a little scattered a little bit this year. We have a couple of kids playing baseball, summer ball so we haven’t had everybody at practice, so we did much better than I thought we were going to do.”

Selma also won its second game of the day against Prattville 42-30.

Jackson had a lot to be proud of Tuesday. Not only did his Saints post a 2-1 record, but the playdate stayed on time at all three game sites — Selma’s two gymnasiums and the court at Wallace Community College Selma.

“We played all 16 teams, 32 games or whatever it was on time and it was one of the best I’ve been affiliated with whether I was coaching or putting it on or at any other school,” Jackson said.

The playdate featured nine playoff teams from last season, including the Buccaneers, who showed why they won the title at the state’s highest classification. Jackson said it was the first time Hoover had ever been to Selma for a game. After the game, he chuckled when asked how big a regular season matchup of the schools might be.

“We’d have to take the roof off [the gym],” Jackson said with a smile.