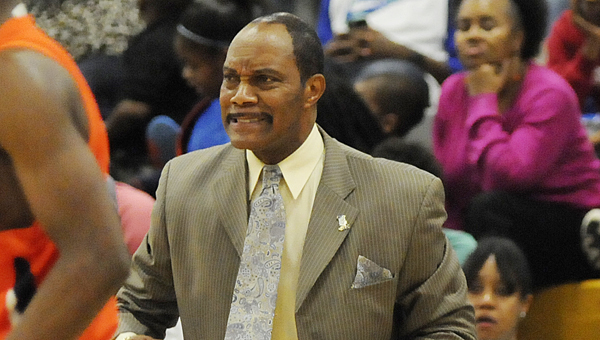 Selma High School basketball coach Woodie Jackson has some of the state’s elite basketball programs coming to Selma June 2 for a playdate.–File Photo

Although it’ll only be the start of June, it may feel more like February or March during Selma High School’s third annual summer basketball playdate.

The Saints and 15 other teams from around the state — including 7A state champion Hoover and nine Alabama High School Athletic Association playoff teams overall — will take part in Selma’s playdate June 2 at Selma High School and Wallace Community College Selma.

“We feel this year this will be the best probably single play date in the whole state, even compared with the colleges Alabama, Auburn, UAB with the field that we have,” said Selma head coach Woodie Jackson, who organized the playdate along with Keith head coach Tommy Tisdale.

Jackson may have a point.

Returning playoff teams include class 6A’s Blount and Hillcrest-Tuscaloosa, who is also an area foe for the Saints, 5A’s Central Tuscaloosa, Fairfield and Greenville, 3As Greene County and 2A’s Central Hayneville and R. C. Hatch.

Many of the teams that aren’t returning from playoff years also have a strong postseason pedigree. Keith was the No. 1 team in 1A most of last season, Wilcox Central qualified for the Final 48 in 2014 and Southside was a state runner-up in 2013.

Prattville, Brookwood and Ellwood Christian are also in the 16-team field.

“The competition level is great and it is probably one of if not the first playdate in the state and to be playing competition like this right off the bat in the summer will be a great start,” Jackson said. “It will show you the things you need to work on for the fall.”

Each team in the playdate will participate in three games. Selma will face 5A’s Central Tuscaloosa at 11 a.m., 7A’s Prattville at 2 p.m. and 7A Hoover at 5 p.m.

“The fundamental stuff we’ve been working on a little bit in practice, we hope to see some of it at least during the playdate,” Jackson said. “We know it is going to get better as the summer [continues].”

Other Dallas County based teams will also have their hands full. Keith will face Fairfield, Brookwood and Greene County; Southside will play R.C. Hatch, Greene County and Fairfield; and Ellwood Christian will battle Greene County, Central Tuscaloosa and Wilcox Central.

Jackson said admission into the playdate will be $2.