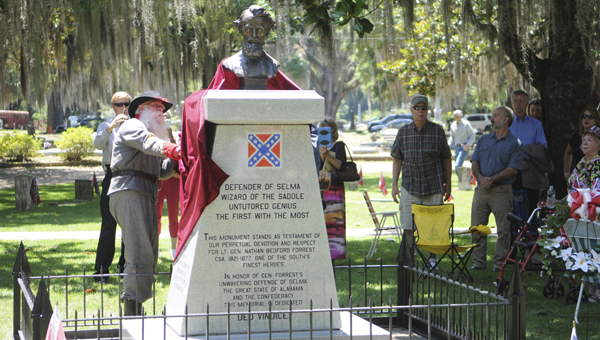 Three years after it disappeared, Nathan Bedford Forrest’s bust is back atop a monument erected in his honor at Old Live Oak Cemetery.

Over a decade since the unveiling of the original Forrest bust, a second ceremony was held Saturday by the United Daughters of the Confederacy and the Friends of Forrest to honor the Civil War general. When the red curtain covering the new monument was removed, cannons were fired and cheers erupted from the crowd of 100 or more.

“Ladies and gentlemen, the general is back,” exclaimed Pat Godwin, president of chapter 53 of the UDC and the Friends of Forrest.

It reads: “This monument stands as a testament of our perpetual devotion and respect for Lt. Gen. Nathan Bedford Forrest CSA 1821-1877, one of the South’s finest heroes.”

Debate over the monument, which has waged on since its original unveiling in 2000, centers on Forrest’s distinction as the Grand Wizard of the Ku Klux Klan. When the monument was first unveiled at the Vaughan Smitherman Museum, it was defaced. In the ensuing year, a decision was made to move it to the cemetery’s Confederate Circle, where it still stands.

In 2012, cemetery workers noticed Forrest’s bust missing and reported it to the Selma Police Department. The original bust has still not been recovered, despite the Friends of Forrest offering a $20,000 award for its whereabouts.

“There are statues of generals in Gettysburg, in Vicksburg, in Manassas — many battlefields in this country. By golly, it’s perfectly appropriate to have a statue of Gen. Forrest here in Selma,” said guest speaker Gen. Bill Rambo, the director of Confederate Memorial Park in Marbury.

Debate over who owned the one acre tract of land where the monument sits — Confederate Memorial Circle — has also been a center for debate. Godwin read a letter from attorney John Kelly, who was recognized as part of “The Dream Team” of lawyers in the ceremony’s program, that stated the land belongs to the UDC.

“In 1877, the Selma City Council appropriated this land to the Ladies Memorial Association, predecessors of the United Daughters of the Confederacy for the purpose of honoring Confederate War dead,” Godwin read. “Now 137 years later, the city of Selma has reaffirmed its promise that this land will continue to be dedicated to these honored dead and to memorialize their sacrifices for the cause for which they died.”