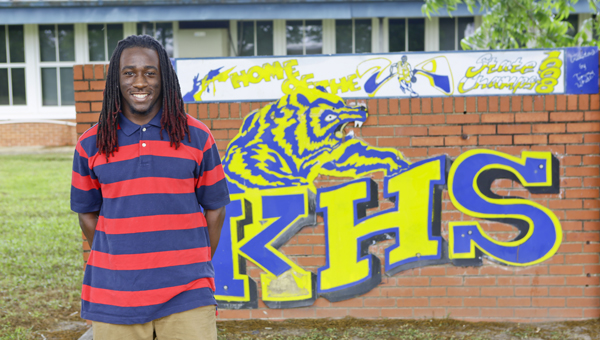 In August 2009, when Deanthony Griffin was only 11 years old, his father Eugene Griffin passed away.

Griffin said it was then that he decided he was going to work hard to achieve great things in his life.

He’s off to a fine start, as he was recently named the Keith High School Class of 2015 valedictorian.

“It means a lot [to be valedictorian], because my dad used to push me so hard through school. When he passed away, it motivated me to be better,” Griffin said. “Me and him were real close, so I had to work hard for him. I know he would be proud of me.”

Griffin graduated Thursday from Keith with a 3.67 grade point average and was involved in many extracurricular activities. He balanced playing football and running track, along with participating in science and math competitions as well as the robotics club.

His future plans include attending Alabama A&M and majoring in mechanical engineering.

Along with his late father, Deanthony is the son of the Catherine Griffin.

“I’m very proud. I think he’s done wonderful overall participating in sports, plus being able to maintain his grades,” Catherine said. “Hopefully, he can stick with [his major] and accomplish what he’s setting out to do and be successful overall.”

Catherine agreed that Deanthony’s drive for success came from his father’s passing.

“What I think, is that he used that to motivate him. He tries so hard,” Catherine said. “[Eugene] would be real proud of him.”

Griffin said he plans to major in mechanical engineering because he has always been a hands-on person and enjoys hard work.

“Most of my life I’ve been doing hard work,” he said. “Outside of school [I enjoy] working, like helping my grandma [Marzel McMillian] plant flowers and stuff. She’s 82 now, but she still tries to go outside and work in her garden and stuff, so I have to go and do it for her.”

William Powell, Keith’s counselor, said he is thrilled for Griffin and all of his success.

“To see his growth, to actually watch him as a student scholar athlete, his grit on the gridiron, as well as his grit in the classroom, it’s amazing how he balances the two,” Powell said. “He’s a superstar in multiple sports, but also a superstar within the classroom.”

Griffin is looking forward to what the future holds, and he is ready to begin his journey.

“I’m really excited about going to college. I get to leave home, get to meet new people,” Deanthony said. “I’m going to try out for the football team. I’ve always wanted to be a [division] I college player.”