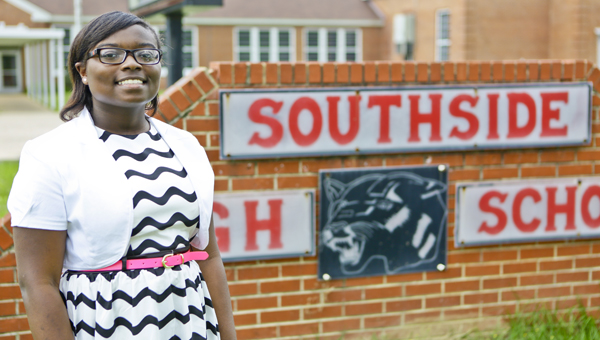 When she was less than a month old, Breana Ennis became very ill and landed herself back in the hospital. Her mom, Dorothy Wright, was a nervous mother at the time, but she said once Ennis was released from the hospital, there was no stopping her.

“As a baby, she was a very sick baby. She went back into the hospital before she was a month old. She wasn’t eating, wasn’t responding to anything,” Wright said. “Once she got out of the hospital, she’s been thriving ever since.”

Ennis found out Tuesday that her hard work and determination to be the best landed her the top spot in Southside High School’s graduating Class of 2015. Ennis will graduate as the valedictorian with a 4.19 grade point average and plans to attend Columbus State University in the fall.

She is the daughter of Sylvan Ennis and Dorothy Wright. During her time at Southside, she was involved in the math club, National Honor Society, Beta club, poetry society and many more.

Breana said she plans to attend Columbus because they have the major she wants to declare.

“They have my intended major and what I really want to go into which is gaming,” Ennis said.

“I’m very excited to learn new things and see new people and have a better environment. I want to appreciate learning new things and learning computer science and how to program games, because I love video games.”

Lacreshia Brown, Southside’s guidance counselor, said Breana is like a daughter to her and she is happy to see her achieving her goals.

“First of all, Breana, she is so special. She is an extraordinary student, superior, she always strives to be the best and she gives everything and every effort, she gives it her best,” Brown said.

Although she wants to get involved in programming video games, Breana said it’s a specific type of game that’s she’s interested in.

“I really want to be a part of a game that has something about God and teaches the Bible,” Breana said.

“It means a lot that I’ll be teaching younger people and the younger generation because they need to learn about him.”

Wright said she takes time to pray with Breana every morning, and that she has always tried to instill the word of God in her daughter.

“Every morning before she gets on the bus, I pray out loud with her. It’s very important. There have been a couple of mornings that I didn’t get a chance to pray with her, actually I would drive to the school, call her out of class, pray with her, kiss her and send her back in,” Wright said laughing about the situation. “I am very proud of her. She is a very special blessing to me and I just wish her the very best for every dream that she has and just go for the stars and keep God first always.”