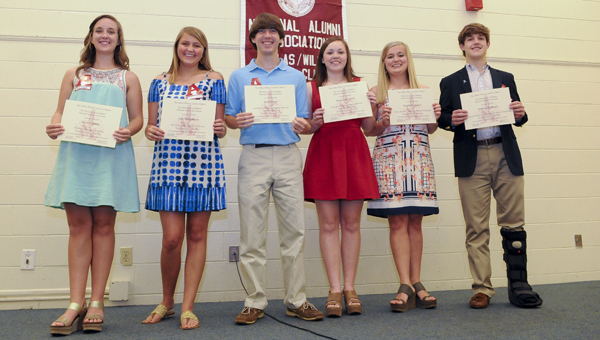 He told them to be consistent.

The young adults got their foot in the door Monday night after being awarded six scholarships totaling $14,000, but Gibson wanted them to know if they expect continued success, they have to be consistent.

Gibson said he learned consistency as a student athlete at the University of Alabama in 2009 where he was expected to excel as a football player and to achieve in the classroom.

“I was young, but I had an attitude that I was going to work for every single thing I deserve,” Gibson said. “Athletes have 8 a.m. class. Workouts were at 6:30 a.m. before class.”

While it is yet to be determined if the recipients will fulfill the weight of Gibson’s message, they were deeply motivated by the financial assistance provided from the Dallas-Wilcox Bama Club.

“It means a lot to me, especially to be supported by the local chapter,” said Morgan Academy’s Mary Logan Kelley, who was awarded the Betty Jean Perkins McKelvey Memorial Endowed Scholarship. “It means that they think of you on this big, new chapter of your life and want to help you out in any way. When it comes to a financial situation, they are going to be there and give you more opportunities that you may not have had to fulfill your years at Alabama.”

Morgan Academy’s Wade Mahan, who was awarded the Sterling Price and Saidee Rainer Memorial Endowed Scholarship, said he was grateful for the scholarship because it gave him more financial opportunities starting out at the University of Alabama.

“Throughout the years, I hope to get more scholarships,” Mahan said. “It really just gives me a solid ground to start at Alabama and pursue my future in computer science.”

Over the last five years the chapter has given over $100,000 to students and are contributing $5,000 to the club’s scholarship funds to be available in 2016 to provide financial assistance for more high school students from Dallas Wilcox County to attend the University of Alabama.

“It’s really helped me get to where I want to be,” said Ann Smith Reeves, recipient of the Sam Earle Hobbs Endowed Scholarship.

“I am really looking forward the next school year in the fall. This banquet has given me a lot of pride in the Crimson Tide.”