The Morgan Academy Class of 2015 has something to be proud of. Together, the class was offered over $2,200,000 in scholarships to various schools.

The school’s counselor, Sheryl Schroeder, said one of the most impressive totals was that of Anna Zhang, who alone was offered $260,104. 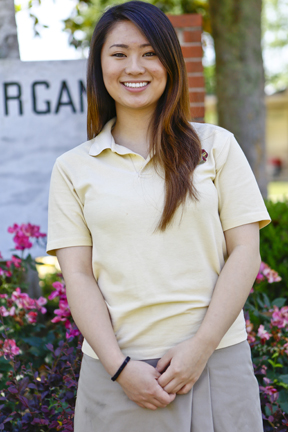 But Zhang is no stranger to such big achievements. She is the valedictorian for the Class of 2015 and is preparing herself to attend New York University in the fall.

Zhang said she will be attending New York University in the fall to study computer science, and she hopes to one day have a job in software development or video game design.

“Ever since I was really young, my mom introduced me to gaming, and I really enjoy that,” Zhang said. “I really want to go do something that I’m really passionate about. I get to put my creativity to use.”

Zhang is the daughter of Keling Guo and Chun Zhang. In her time at Morgan, she has been involved with journalism, scholars bowl, beta club, French club, drama club and several more clubs and activities. She volunteered at Vaughan Regional Medical Center and put in over 250 hours with Sav-a-Life. She is graduating with a weighted grade point average of 4.143.

“I’ll say my personality is very different,” Anna said laughing about the topic. “Everybody’s always saying ‘oh, you’re so weird, but in a good way.’”

Managing multiple activities, volunteer hours and free time can be hard when trying to maintain a high GPA and the top spot in the class, but Anna always has a plan.

“I have to plan my day out. I have to plan a schedule where I limit myself the free time that I can just do whatever I want, and then there’s also specific study time” she said.

Schroeder said Anna is a wonderful student and very deserving of the honor of valedictorian.

“We are extremely proud of Anna. She is a very driven and hard working student, and she’s got a tremendous work ethic. NYU is a very prestigious, hard university to get into and she was accepted readily. and I know she’s going to do a great job,” Schroeder said.

“She has set her sights on what she wanted, and I think she’s known for a long time that she just doesn’t want to settle. She’s an ideal student.”

Anna’s mom does not speak English fluently, but she did say that Anna is a good student and a hard worker when it comes to helping her at their business, China Wok.

Anna said the secret to success is perseverance.

“You just got to keep on trying and don’t give up, because once you give up, that’s it,” Anna said. “If you keep on trying, you’ll eventually get there.”