With graduation quickly approaching, Meadowview Christian School senior Jessie Boswell is beginning to reflect on her last four years as a high school student. There were many nights of little to no sleep, long hours of studying and plenty of good memories. 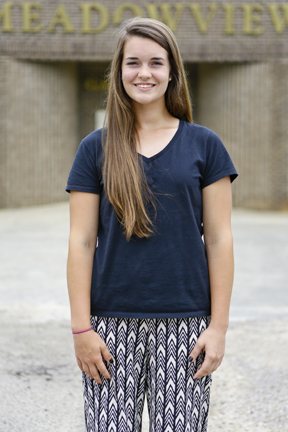 Meadowview Christian’s Jessie Boswell is the school’s valedictorian for the 2014-2015 school year. Boswell plans to attend the University of Mobile in the fall.–Alaina Denean Deshazo

With a 4.0 grade point average and plenty of extra curricular activities, Boswell is graduating as the valedictorian of the Class of 2015 at Meadowview. She is the daughter of Dale and Ruth Boswell and a native of Selma.

She plans on attending the University of Mobile in the fall, and said she chose the school because they offer a mission work program.

“I just think it’s important to spread God’s word,” Jessie said. “Everybody, when they think of missions, they think of going to Africa or Asia or somewhere like that, but they do a lot of missions in the United States.”

Jessie is involved in mission work with her church, Shiloh Baptist Church and plans to attend a mission trip to North Carolina with the church this summer.

Her mother said she is extremely proud of her daughter and all of the work she had put in to be where she is today.

“Words cannot express how proud I am of her and her accomplishments,” Ruth said. “She has really worked hard to achieve this.”

Jessie has been involved with softball, volleyball, Future Business Leaders of America, has been awarded a Presidential scholarship and was a Girl of the Year nominee, among many other activities and group memberships.