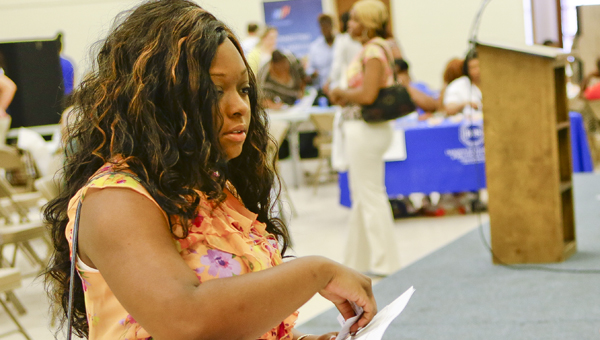 The Dallas County Department of Human Resources held a job fair Wednesday at the Carl C. Morgan Convention Center to give people in the community a chance to connect with local employers and possibly land themselves a new job.

Multiple organizations were on hand to share with the community what they had to offer and speak with possible employees about their companies.

“The event is being held today so that we could hopefully match potential employers with potential employees and we are hoping that the consumer will be able to make some contacts, initial contacts, even if they have to follow up later on,” said Beverly Owens, a representative with Dallas County DHR.

People shuffled from one vendor to the next, asking questions, answering some and even filling out applications.

“We are hoping that when the participant leaves, that they will have made contacts,” Owens said. “I have spoken with some and they said that they have made some good contacts, so that’s the whole purpose of us coming together.”

One participant, Iverianna Williams, said she enjoyed attending the job fair and felt that it was something Selma needed to have each year.

“I think job fairs are very compatible for the city because it helps people to seek out for a second chance or [give] people great opportunities [to find a job],” Williams said. “I had an awesome time [looking around and speaking with different businesses].”

She said going to the fair was a way for her to connect with employers and open doors for future possibilities.

“I came out here to seek an internship based on my major. I’m a returning student from Alabama A&M University majoring in computer science and I was just seeking an internship or any job offers for my career when I get ready to graduate from school [next year],” Williams said. “So far I have been interested in … anything that’s based on computer science.”

But Owens said it’s not just the potential employees that benefit from the fair.

“[It’s also for] the different businesses in the area to come together and hopefully learn about each other’s program more and what they have to offer,” Owens said.

From the first year until now, Owens said the job fair has grown and it continues to get better. But the best part to her, she said, is finding out that the effort of those at DHR have helped the community.

“It’s just terrific [when someone gets a job]. It’s worth it. It makes it seem like we’re not just doing this in vain. Even when we’re in our office and someone calls us and says, ‘Hey, we started working,’ that is just fantastic,” Owens said. “Today is [proof] that people are looking for employment and they want to work.”