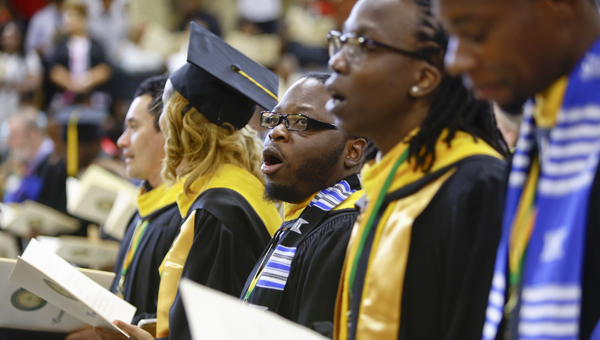 As soon to be graduates lined up Saturday outside of the Julius and Mary Jenkins Center at Concordia College Alabama, they were filled with many emotions.

Some were smiling big while others appeared nervous. But one thing they all had in common was that they were about to become alumni.

The guest speaker for the ceremony was Dr. Constance Smith Hendricks. She is a graduate of Alabama Lutheran Academy, now Concordia College Alabama, and serves as president of Concordia’s National Alumni Association. She is a tenured full professor with graduate faculty status at Auburn University in the School of Nursing.

During her speech, Hendricks gave the graduates words of wisdom and encouragement for the future.

“You are a Concordia College Alabama alumnus. You successfully navigated the challenges to demonstrate that you are worthy of crossing this platform this morning. You have been nurtured in a Christ-center education environment for a life of responsible service in the church, in the community and yes, even in the world,” she told graduates. “Best wishes in your life’s journey as you become better than the best in your role as a member of the Concordia College alumni family and as you become the best you can become.”

Jamal Kidd, a Mobile native who graduated with a degree in business administration, said his emotions were high during the ceremony, but he never took the smile off of his face.

“Words can’t event come close to [the excitement]. All the hard work put into it, it’s like pandemonium in my head with my emotions,” Kidd said. “Seeing all my colleagues walk across the stage, that was the most exciting part.”

Kidd said his plans include interviewing with the city of Selma and hopefully becoming an employee working with youth development.

Another business administration graduate, Brandon Gardner, from Augusta, Ga., said graduating was a powerful message to himself.

“I came here not knowing what I wanted to do, so I was just taking every class available. Eventually I had to move on to declare a major … so I chose business,” Gardner said. “I’m ecstatic. It’s a blessing because from what I’ve … been through and where I’m from, it’s rare; so this is what I’m truly proud of. It’s more of joy than anything because I knew I was going to get here eventually if I just kept going and pushing. I’m truly proud of myself.”

Like Kidd, Gardner said he plans to stay in Selma and he would like to eventually go back to school to get his masters in nursing.

Although the graduates were proud of themselves, there was sure to be one other person that was just as excited and pleased with their outcome.

“I am extremely proud of [the graduates]. These students have worked extremely hard, put in a lot of hours towards their studies, and I’m extremely proud of them,” said Glenn King Jr., chair of the division of business and computer information systems at Concordia. I hope that they go and get a job and make money and bring money back to Selma-Dallas County.”

But perhaps it was Taquanta Johnson, recipient of an associates in arts and general education, that had the most to be proud of.

“I’m doing it for my son, Javion,” Johnson said with a smile on her face and the look of freshly wiped tears. “I do it because I want him to look up to me and say my momma did it.”

Johnson said she was excited about walking across the stage and proud of the lady she has become.

“I’m very proud because at one point in my life I didn’t think that I would be graduating from college,” Johnson said. “A lot of emotions [were passing while walking across the stage]. I wanted to cry but I held it in.”

Johnson plans on continuing her success by completing her bachelors degree in criminal justice and one day becoming a juvenile probation officer.