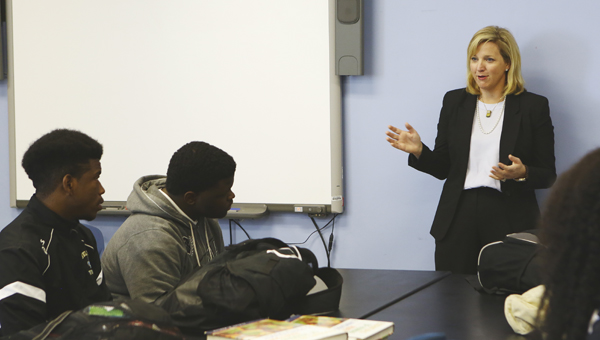 President Dwight Eisenhower declared May 1 to be Law Day in the United States in 1958 to celebrate the foundation of law and the role it plays in society.

In observance of the national day, local lawyers made their way to high schools Friday to speak with students about their profession.

Jana Garner, a local attorney and member of the Alabama State Bar Association, was one of the lawyers to speak at Selma High School.

“I really enjoy talking to children. It’s one of the reasons I became an attorney because of my commitment to families, which includes children,” Garner said. “I really enjoy high school age children because they’re experiencing, learning, exploring. They’re sponges for information. It’s a great time to talk to them about something I have a passion about, which is the judicial system.”

Garner spoke to the class about her role as a lawyer, the judicial system as a whole and why she decided to get involved with law and choose it as her career.

“Access to justice is what made me want to go into law. I have a passion to be a voice for those who don’t have a voice,” Garner said during her presentation. “Even though I would love for each one of you to be lawyers, go an do what you make the best grades in because that’s where your skills lie, that’s where your passion lies.”

Justice Richardson, a senior at Selma High School, said she enjoyed having someone come into her class to speak and she took away a lot.

“It’s very exciting because it gives me the chance to see what made that person want to go into the subject area of their choice, so it’s just nice to see from their personal opinion what interests them and why,” Richardson said.

“I felt like she was trying to [give a] life lesson, really just to go into whatever subject area interests you the most just to do what makes you happy and she seems really happy being involved with the law.”

Garner said her favorite part about speaking with the students is their energy.

“They genuinely have an interest in how our government works. They want to know experiences because they’re trying to make a lot of decisions about their own life and I enjoy plugging into that.”

The Fourth Judicial Circuit Drug Task Force, with help from other agencies, made two arrests Friday afternoon at an apartment... read more