Johnson honored for giving back to fire department 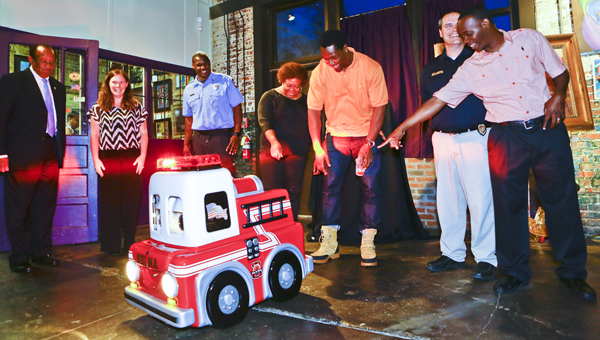 NFL star and Selma native Michael Johnson made his way to the Queen City for his annual football and cheerleading camp. Leading up to the event, a reception was held for the sponsors of the camp.

With his camp and frequent donations, Johnson is always finding ways to give back to his hometown of Selma. This held true again when he made a $10,000 donation to the Selma Fire Department in honor of their fire prevention program.

“This is my community, the community that made me. Why not invest in yourself? I just feel like that’s what we all should do,” Johnson said. “Nothing is wrong with going out and helping other countries and helping other people, but I believe in cleaning up your own backyard first.”

With the money he donated, the fire department set out to find an interactive tool that aids children in learning all there is to know about fire prevention.

“We took those funds and looked for something we could purchase to better our fire prevention program, and that’s where we came up with the idea of the interactive fire truck,” said Candice Irwin, the secretary for the fire department.

The little engine that could, temporarily named Engine 3.5, is an interactive fire truck that is used to help kids understand the dangers of fire while also entertaining them and putting a smile on their faces. During the event, Johnson was surprised with a speech from the Selma Fire Department and the presentation of the fire truck, of which has MJ-93 on the tag to represent Johnson’s MJ93 Foundation.

“Michael Johnson has been a great support to the children and the community of Selma and Dallas County,” Irwin said. “Back when Sparky went missing and was damaged, he made a contribution to help us get him back, and then he also made a contribution to our department for our fire prevention program after that.”

Johnson was smiling ear to ear when the engine made its way to the floor, flashing lights and all.

“It gives the kids something that when [the firefighters] go and speak to them, it keeps them entertained, and keep their attention, because fire safety is very important. Having an interactive machine like that is cool. It had me entertained and I’m 28-years old,” Johnson said. “It was fun and I enjoyed it.”

Johnson said he’s all about giving back to his community, and he’s happy to be able to do that through the fire department.

“I’ve been blessed with so much. God put me in the position to have the platform that I have and the ability to do what I do and that’s been very rewarding. So I feel like he’s blessed me to be a blessing to others. I’m just trying to do my part.”

Irwin said on behalf of the fire department, they are thankful for Johnson and his contribution to his community.

“We are very thankful and we just want him to know how thankful we are for it and everything he does in the community,” Irwin said.“It’s awesome that he thinks abut us still and the children here and cares so much.”