Gee’s bend quilter will be artist of the month

The Boykin native’s quilts will be featured in an art show that will open Sunday, Feb. 8 from 2-4 p.m. at the Selma Art Guild. Her work will hang in the gallery until Sunday, March 8 and is free to view.

“I’m excited about it,” Pettway said. “I’m going to be a part of history at this point.” 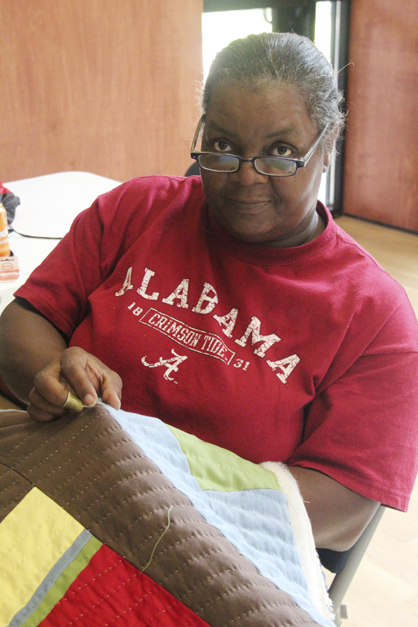 Gee’s Bend quilter Mary Margaraet Pettway will be the Selma Art Guild’s Artist of the Month for February.

The women of Gee’s Bend, a rural small rural community on a peninsula at a deep bend in the Alabama River formally known as Boykin, developed a “distinctive, bold, and sophisticated quilting style based on traditional American and African-American quilts,” according to the Quilts of Gee’s Bend Facebook page.

Their work has been featured in some of America’s most prominent art museums, including the Corcoran Gallery of Art in Washington, the Whitney Museum of American Art in New York and the Museum of Fine Arts in Houston.

The Gee’s Bend Quilters Collective sells and markets the quilts being produced by the women of the Bend.

Inspired by her mother, Lucy, Pettway said she saw making quilts, clothes, aprons and bags as a necessity as well as a way of life because it required an individual to use what they have to make what they need.

Selma Art Guild president Jo Pate said the Guild wanted to select a Gee’s Bend quilters for its Artist of the Month because they’re so well known.

“Her colors are wonderful and also the free spirit of her quilts,” Pate said.

Normally, the Selma Art Guild only features its Artist of the Month’s work for that particular month they were chosen, but there are changing things up this time around.

The Guild is going to feature Pettway’s work, which will be presented in honor of Black History Month, for a little longer to celebrate the 50th Anniversary of the Bridge Crossing.

“We wanted to leave them up to be a great example for the visitors of Selma to be able to see the really traditional craft of quilting,” Pate said. “It’s so typical of this area.”

NAACP gala will honor Webb-Christburg, others