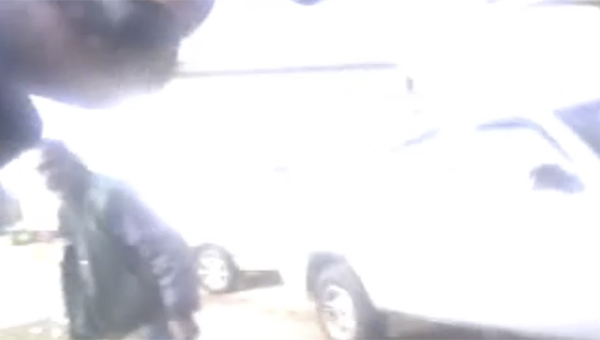 This photo was taken from video captured by the Selma Police Department officer who shot Ananias Shaw in December 2013. The film was released to the public this week.

By Justin Averette and Sarah Robinson

More than a year after a Selma police officer fatally shot a hatchet-wielding man, the department released Wednesday the officer’s body-camera video of the incident.

The video’s release comes after a month of protests calling for the tape of 74-year-old Ananias Shaw’s death to be made public by members of the man’s family and community activists.

The video is almost five minutes in length and was taken from the officer’s lapel camera during the Dec. 4, 2013, altercation between Shaw and the Selma police.

The shooting was investigated by the Alabama Bureau of Investigation and turned over to a Dallas County Grand Jury. Both decided the officer acted correctly given the circumstances.

Selma Police Chief William Riley said Friday he felt the public should have access to the tape now that the family has seen it.

Riley has used the video to remind his officers that they should always have their body cameras on when they respond to an emergency call because of the impact of visual evidence.

“Would you rather rely on people out here that are just not going to tell the truth, or make sure that you have some audio or video to back up what you did and show that what you did was proper and legal?” Riley said he tells his officers. “The choice is yours.”

On Dec. 4, 2013, the department received an afternoon call about a disturbance at Church’s Chicken on Broad Street. When officers arrived, they found Shaw in an abandoned building at the intersection of Washington Street and Griffin Avenue.

The video picks up at 2:28 p.m. with the unidentified officer en route to the scene. The officer exits his patrol car at 2:30 p.m. and is shown with a group of other officers outside the former Towns Laundromat. 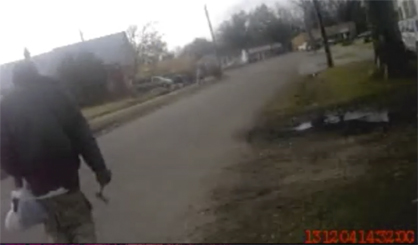 One of the officers is overheard as saying, “Mr. Shaw, come here man, I just want to talk with you.”

Seconds later Shaw emerges from the building carrying a hatchet. Officers yell for him to “put the ax down” and the officer wearing the camera draws his firearm, telling other officers, “I’m hot,” meaning that his weapon has been drawn.

Shaw tells the officers that he’s not putting anything down and continues to walk away, cursing at the officers.

Several officers continue to follow Shaw as he walks from the scene, telling him more than 25 times to put the hatchet down.

Shaw says, “Shoot it, shoot it,” as he walks toward the officer.

Two seconds later, the officer fires a single round and Shaw falls to the ground. The officer is heard telling other officers four times, “He came after me.”

Ananias’ younger brother Edward Shaw of Selma said he watched the video with approximately 10 other family members last month at the Selma Police Department, but he isn’t satisfied.

Edward said he believes the video had been edited and believes there is additional footage taken that’s not being shown to the family or the public.

“I don’t know who’s pulling the strings here in this city government that we have and why they’re being so underhanded about it instead of being forthright, forthcoming and doing the right things, and that’s not being done in my opinion,” Edward said.

Starting Dec. 3, Rose Sanders, a community activist and wife of Alabama State Sen. Hank Sanders, began leading a protest every Wednesday demanding the video be made public, while rallying in response to police shootings elsewhere in the country.

Like Edward, Sanders believes additional footage exists that has not been released.

“There were three or four officers out there. All of them should have had a videotape. We need to see all of the tape to get the whole truth,” Sanders said. “We only saw one, and the one I saw was incomplete.”

Riley said only one video captures the incident and it was released in full. He said the department has a limited number of cameras, and all of those aren’t always available.

According to Riley, the department has at least one officer on shift with a camera. He said the equipment is sometimes not available because it’s being recharged or repaired.

“We try to have all of them with it,” Riley said. “Like anything else, you always want to have more, but you only have what you got and keep on moving.”

The release of the video comes after several police officer shootings that made national headlines with cries of racism and police brutality. Riots and national protests followed the shooting of unarmed Michael Brown in Ferguson, Mo. and Eric Garner in New York City.

In the Selma shooting, however, both Shaw and the officer who shot him are black. Riley has said repeatedly, “Selma is no Ferguson.”

Following the shooting, however, the city of Selma opted to provide police officers a new, less-than-lethal option for addressing potential threats.

The Selma City Council voted in December 2013 to buy 27 stun guns at a cost of about $36,000 to give officers more options when dealing with life-threatening situations . The city purchased an additional 26 in September for about the same price from the half-cent sales tax fund.

The Tasers were used 10 times in 2014, according to the Selma Police Department.

Editor’s note: Since the Shaw family has requested that the video be widely and publicly distributed, we are providing a link to the video here: http://www.vimeo.com/115821117. However, please be advised the video is graphic in nature, containing both the shooting and the aftermath, and graphic language. Viewer discretion is advised.

Nateshia Powell holds her new baby girl, the first baby to be born in 2015 in Selma. The staff at... read more