Johnson welcomes over 40 students to Tampa 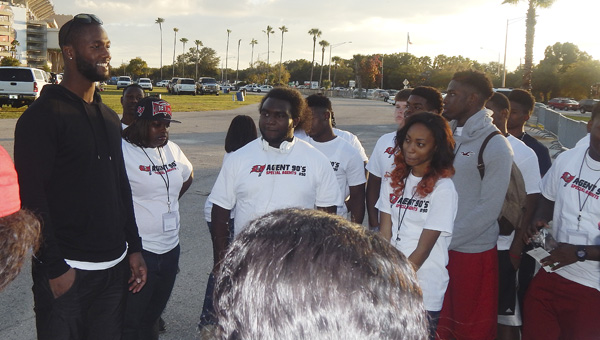 Selma native and NFL star Michael Johnson talks with some of the over 40 local students that got to watch him play in Tampa Bay during Thanksgiving weekend. The students had to have a B-average, write an essay and get two reference letters in order to apply for the trip, which was completely paid for by Johnson’s Foundation, MJ93.–Submitted Photo

Through his organization, MJ93, Johnson invited the students down to watch the Buccaneers take on his former team, the Cincinnati Bengals, on Nov. 30. The students were treated with a trip to the University of South Florida, the Florida aquarium and a great view to watch Johnson and Tampa Bay.

“Michael loves Selma and he wants to do whatever he can do to help them see themselves doing what they really want to do,” said Michael’s mother Thomasene, who did a lot of the planning for the trip. “He wants them to see a future.”

The students were required to have a B-average and had to write an essay to be eligible for the trip. They also needed two letters of recomendation. Five of the seven local high schools had students partake in the trip, although students from every high school were included.

Thomasene said many of the students’ favorite part of the trip was the time at the University of South Florida, where coaches showed off many of the athletic facilities on campus.

“The coaches took them on a tour of the meeting room of the football team, as well as the workout room and the practice facility. Of course, the football players loved that — all the boys — loved that. I’ve gotten letters from them. They really loved that part.”

A recruiter for the university also talked to the students about the importance of taking the ACT test early and often.

The students also got to dine at Lee Roy Selmon’s Restaurant, before heading to Raymond James Stadium Sunday to see Michael play.

“It was real fun because we got to bond with people we don’t bond with every day,” said Southside’s Khamari Gibbs. “We got to see different things and things outside of Alabama. It was nice. I appreciate what he did for all of us.”

After the game, which was a close one-point loss for the Buccaneers, Thomasene said Michael made sure to visit the Selma students in attendance.

“He made a point that after he finished playing that ballgame; he took time, missed the bus and autographed anything they wanted and took pictures with them,” Thomasene said.

Gibbs said it meant a lot for the students to get to meet with the NFL superstar after the game.

“We saw him after the game. He stood around and took pictures and talked to everybody,” Gibbs said. “He thanked us for coming, and we thanked him for inviting us.”

The plan is for Michael to try to get Selma students down to Tampa again in the near future, but Thomasene does not expect it to be this year due to Tampa Bay only having three games left.

The defensive end holds an annual Funfest and youth football and cheer camp in Selma during the spring.

Johnson has played through injuries this season, but has 21 total tackles and three sacks in his first year in Tampa Bay. The Buccaneers are 2-11 on the season entering Sunday.