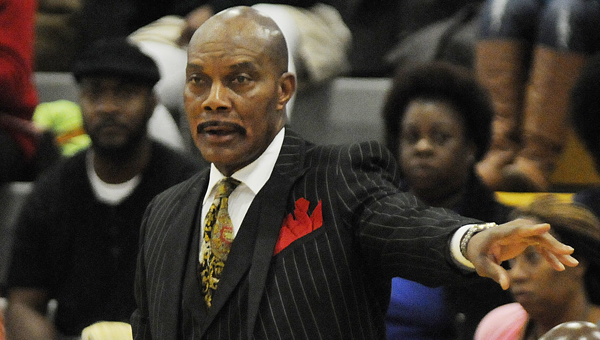 Selma head coach Woodie Jackson coaches in last week’s game against Francis Marion. Jackson and the Saints are off to their best start in a number of years after winning their first four games.–Daniel Evans

The Selma Saints varsity boys’ (4-0) have been on fire to start this season, winning their first four games and probably opening up a lot of eyes around Dallas County.

That undefeated record will be put on the line Friday and Saturday in the Selma High School Thanksgiving Shootout, when the Saints try to prove their mettle against some stiff competition. Selma will battle Wilcox Central, who made the Class 4A state Final Four last season; Greenville, who played in a sub-regional contest in 2013; and a senior laden Ellwood Christian squad restless to get on the floor for the first time.

“I’m quite sure we are going to see some things during the tournament that we are going to need to work on,” Selma boys’ coach Woodie Jackson said. “We play Thanksgiving and Christmas tournaments to continue to work on the weaknesses you find from game to game.”

The Selma boys will open the tournament against the Eagles Friday at 8:15 p.m., with the winner meeting the Wilcox Central-Greenville winner in Saturday’s championship game.

Jackson said he has stayed on his players, trying to keep them focused despite the great start, but thinking back he’s not sure if he’s ever had a team start 4-0 during his time at Selma.

“This could be the best start here since I’ve been here,” Jackson said.

Jackson likes this group of Saints because they play hard, jump on the floor after loose balls and make opponents earn the majority of their points on the offensive end.

“I act the same way in practice and in games as I would if we were 0-4,” Jackson said.

“I am still on them and riding them. This group knows that and they expect as a unit that we plan to take a sledgehammer to a nat. We are not going to lighten up off of that.”

The first boys game will be between Wilcox Central and Greenville at 7 p.m. Friday.

The Selma Lady Saints will also participate in the tournament, although the teams in their bracket are completely different from the ones the Selma boys will face. Keith’s Lady Bears will face the Quitman Lady Panthers in the first round of the girls tournament at 4 p.m., followed by the Lady Saints against Montevallo at 5:30 p.m.

Admission is $6 to get into the tournament.

Consolation games and championship games will be played Saturday starting at 3:30 p.m. and running all day.

Ellwood Christian guard Jalen Furlow rises for a layup in a game earlier in his career. Furlow and the Eagles... read more