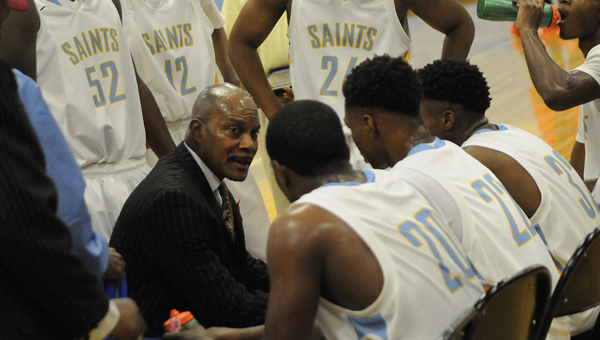 Selma head coach Woodie Jackson talks to his team during a timeout in Friday’s 80-70 victory over Francis Marion.–Daniel Evans

After leading by only four at halftime, Selma started the third quarter on a 20-6 run that created enough breathing room that the Saints could survive a furious Rams’ rally in the final minutes.

“We played better defense and handled the ball a little better,” Selma head coach Woodie Jackson said. “When we settled down, I think we did a good job.”

It was a big win for Jackson’s Saints, who were without two starters and two key reserves following a bench clearing incident in Tuesday’s game against Sidney Lanier. In the final minutes of that game, a confrontation occurred between the two teams and four Saints left the bench area, which is an automatic suspension, equal to 20 percent of a team’s games, according to Alabama High School Athletic Association rules.

Jackson said his team overcame that Friday night and came together to get another big victory.

“We pulled together,” Jackson said. “…They did a good job and they gelled. The two kids we brought up from the B-team, they played well.”

Jackson beat a team he knows well, as five of his six state championships rings came while he was a coach for Francis Marion. Last season, the Rams edged the Saints 49-48 at Selma High School to deny Jackson his 700th career win.

Jackson got that win in Selma’s next game and now he’s racking them up in a hurry with a current group of Saints he calls “scrappy.”

“They work extra hard,” Jackson said of his current team.

“We are trying to improve day by day and practice by practice.”

In Friday’s game, they outran the Rams in a fast paced game.

Selma led 37-33 at the break behind a first half that saw six different Saints score. The third quarter ended up being the deciding factor, as Selma jumped out a big lead and pulled away.

“We will get another chance at them. I think a couple of our guys heard about the guys who weren’t playing and didn’t bring their total package to the game.”

The Rams made a run in the final quarter, keyed by Rod Shelton, who scored 12 of his 14 points in the fourth.

Shelton knocked down a three-pointer and then got a layup off of a steal in the final minutes, closing the Rams within 75-70.

The Saints broke away, as Aderick Moore got a breakaway layup in the final seconds.

Selma will host the Thanksgiving Shootout Tournament Friday and Saturday. 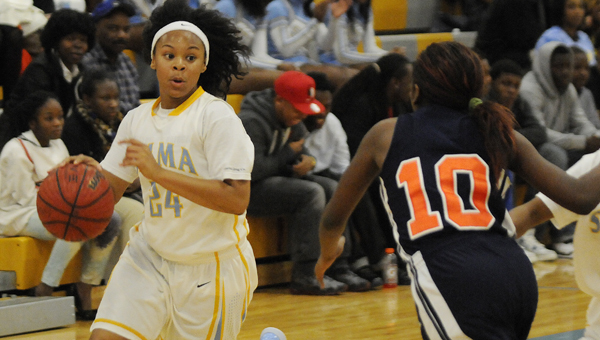 Selma’s Lady Saints (3-3) jumped out to a 21-point lead in the first half and cruised to a 50-33 victory Friday over Francis Marion.

Jamya Smith hit three three-pointers and led the Saints with 14 points and Areyana Williams had 11 points.

“Last night against Demopolis was a thriller for us,” Selma head coach Anthony Harris said. “They looked like Selma High Saints last night. We got back pretty late night and I was a little surprised at how they jumped out there [tonight].”

The Saints played everybody Friday, including point guard Jacquetta Dailey, who had missed the first few games of the season. She scored four points in her second game of the year. Selma led 31-10 at halftime and 46-22 after three quarters.