Tipton uses big second half run to ease by Martin 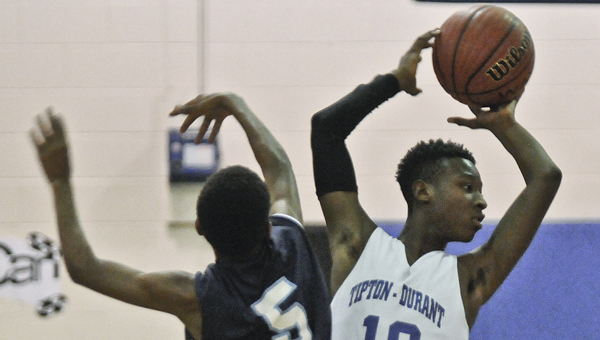 Tipton-Durant’s Jaylyne Craig looks to pass to a teammate, as a Martin defender guards him closely during the second half of Thursday’s game at Tipton-Durant Middle School. –Daniel Evans

Tipton-Durant used a 16-0 run in the second half to pull away from county rival Martin Middle School 42-16 Thursday.

Tipton’s Keishon Williams keyed a scoring spree in the fourth quarter — driving for two layups and knocking in a key three pointer — to help the Blue Devils (5-1) pull away for a big win.

“Any time you are playing a rival, it’s big,” Tipton head coach Courvoisea Fails said. “It’s like Alabama and Auburn, they can still knock them off, so you still want those bragging rights for next year.”

Tipton led by only one point after a sluggish opening quarter from each side. The Blue Devils’ defense took command for the final four quarters, allowing the Bulldogs to score only ten points the rest of the way.

“We played our game,” Fails said.

“We had to get to our offense, break down the defense. We are an up-tempo game and I could tell we weren’t ourselves in the first half. I got on them about the effort and the intensity and told them to turn it up. They did that defensively and it helped out a lot.”

Martin (2-3) scored only eight points in the second half, despite going into the fourth quarter only down 12 points. Bulldogs’ coach Jeremy White said his team couldn’t keep pace once the Blue Devils imposed their faster tempo on the game.

“You can’t play at their pace when it’s not your pace,” White said.

“We like to slow it down and they like to run fast. We’ve got to stop them, stop the ball and play a little fastbreak defense.”

The Tipton lead was 18-8 at halftime, but a three-pointer by Jaylyn Craig and a layup by Ernest Hatcher helped build that advantage to twelve before the end of the quarter.

“We had too many turnovers and they got out on the fastbreak,” White said.

“We didn’t get back quick enough. Our defense kind of broke down. We just didn’t play good enough defense in the second half to win.”

The fourth quarter was a Tipton barrage, as the Blue Devils seemed to hit shots from everywhere on their way to a 17-point quarter. Williams scored a majority of the points, but then passed to teammate Malik Johnson for a three-pointer with 2:08 left to make it 38-13 Blue Devils.

Blue Devils hang on for victory over Bulldogs

Tipton’s Christina Watts, right, goes up for a shot in front of the outstretched arm of Martin’s Aaliyah Hatcher in... read more