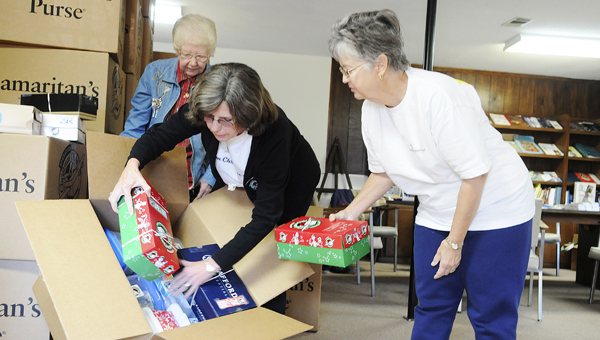 The Selma Baptist Association has spent the week collecting shoeboxes of gifts as part of Operation Christmas Child. The international effort provides Christmas presents to less fortunate children around the world.

As of Wednesday, the group had received about 1,997 shoeboxes, with 973 collected Monday and 1,024 received Tuesday, according to the Relay Center Coordinator Sandra Canterbury.

“It’s wonderful just to know that these children are going to have a Christmas, some of them never had anything,” Canterbury said. “And it’s really not about the gifts that go in the boxes, it’s more about the fact that they end up knowing about the Lord Jesus Christ.”

Created by the nondenominational evangelical Christian organization Samaritan’s Purse, Operation Christmas Child has provided more than 113 million shoebox gifts to children in more than 150 countries since it started in 1993.

This year, the gifts will be delivered to hundreds of people in Hong Kong, Finland, Spain, the United States and the United Kingdom.

The Selma Baptist Association has been collecting donations as the Dallas County area’s relay center since about 2000.

“One of the most important reasons that I do shoeboxes is because of the blessing I receive just to know that I am doing for some child somewhere else,” Jones said. “I have three adopted children from overseas, and if they were not in my family, maybe they would be receiving a shoebox.”

Participants should place a label on the box that identifies the sex of the child the shoebox is intended for and the preferred age category. The label can be downloaded from the Samaritan’s Purse website.

Supporters should also include $7 with the shoebox to pay for shipping.

The group received about 2,401 shoeboxes last year, so they are hoping to reach that same amount by the Friday, Nov. 21 deadline.

Donations for Operation Christmas Child should be sent to Selma Baptist Association located on 2193 Broad St. in Selma, across from the Selma City Schools Central Office, during their hours of operation.

Information can also be found online at samaritanspurse.org.

Angela Snell looks on as Ronald Thomas writes on his luminaria during the Relay For Life Selma-Dallas County kickoff Cancer... read more