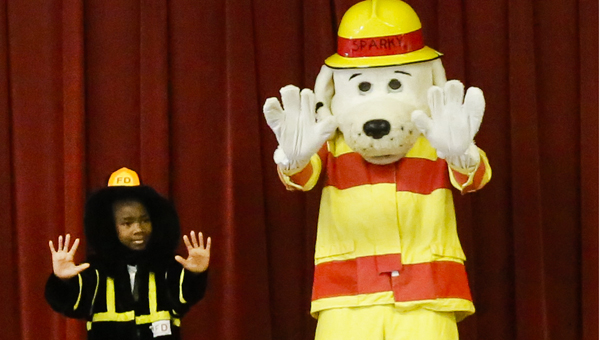 The Selma Fire Department’s Sparky costume has been found but is too damaged to be used.

The Selma Police Department spotted the costume behind the old Pancake House around noon, according to Lt. Curtis Muhannad.

The costume, which was stolen from a vehicle parked at the Station 3 firehouse Oct. 20, was found weather-damaged, dirty, torn and missing pieces, according Selma Fire Chief Mike Stokes.

“It was destroyed for all intents and purposes. We’re glad Sparky has been found, but he’s very sick,” Stokes said.

The department is reaching out to the public for financial assistance to fund a new costume.

Sparky’s main purpose is to teach local students about fire safety and prevention.

The firedog, which has been with the department for four years, also serves as the grand marshal for Monster March, participates in the Christmas parade and entertains kids at other local functions.

When administrators with Selma City Schools, Dallas County Schools, Ellwood Christian Academy, Meadowview Christian School and Morgan Academy learned about Selma Fire Department’s need, they leaped on the chance to support the cause with fundraising.

Acting Selma Superintendent of Education Larry DiChiara said all local schools would like to collectively raise enough money by Friday to replace Sparky.

If the schools exceed their goal, they will donate the remaining money to the Fire Department for other uses.

DiChiara said some people may not take the cause seriously, but it’s symbolic of a much bigger concept.

“Sparky brings happiness and joy to all of our residents, whether they [attend] private school or public school,” DiChiara said. “It helps teach people about fire safety, which helps save lives, so it’s important that we pitch in to replace it.”

Selma Fire Department Secretary Candice Irwin said the department appreciates the public’s willingness to chip in for a new costume, and it hopes everyone will continue to support the department following Sunday’s find.

Donations can be made at any fire department in Selma.

Officers honored for decades of service

Lt. Johnny King has been with the Selma Police Department for almost three decades. He works now as the Internal... read more