Windham to be inducted in state HOF 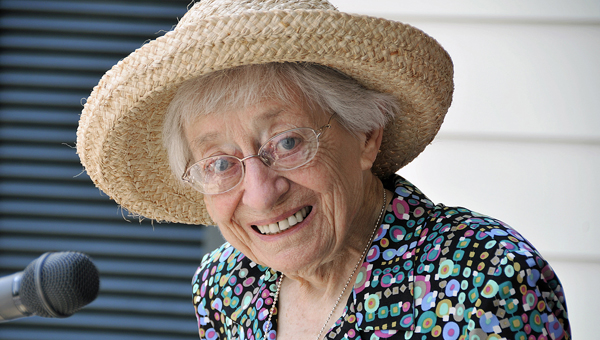 Selma legend Kathryn Tucker Windham will be inducted into the Alabama Women’s Hall of Fame in March 2015.

Selma legend Kathryn Tucker Windham will be inducted into the Alabama Women’s Hall of Fame in March 2015.

A native of Selma, graduate of Huntingdon College and lifelong resident of Alabama, Windham is well-known as a master storyteller, author of 24 books, playwright, photographer and popular public television and radio personality.

Windham began her writing career at the age 12 when she became movie editor for her cousin Earl Tucker’s weekly newspaper, The Thomasville Times.

After spending her childhood in Thomasville and graduating from Huntingdon College, she went to work as a reporter for The Alabama Journal.

She married A.B.Windham in 1946, and they moved to Selma, where their three children were born.

Windham joined the staff of The Selma Times-Journal in 1956 and won several Associated Press awards for writing and photography.

Although Windham retired from newspapering in 1973, she never retired from spinning tales and truths to anyone who would listen — and thousands did.

She founded the Alabama Tale Tellin’ Festival, which has been held annually in Selma since 1978.

Windham loved to tell stories about ghosts and about growing up in rural Alabama. She was featured on National Public Radio’s All Things Considered and was a regular storyteller on Alabama Public Radio’s Alabama Life.

In 1995, she received the National Storytelling Association’s Circle of Excellence Award and Lifetime Achievement Award.

According to the Alabama Women’s Hall of Fame’s guidelines, a nominee must have been deceased for two years.

The induction ceremony will take place in Alumnae Auditorium on the Judson College campus in Marion, and will be open to the public at no charge.

A luncheon in her honor will follow the induction ceremony.

Reservations will be required for the luncheon.

The AWHOF, founded in 1970, is housed in the A. Howard Bean Hall on the campus of Judson College in Marion.

The induction ceremony will be held in Alumnae Auditorium on the Judson College campus. Additional information will be available on the AWHOF website at www.awhf.org.