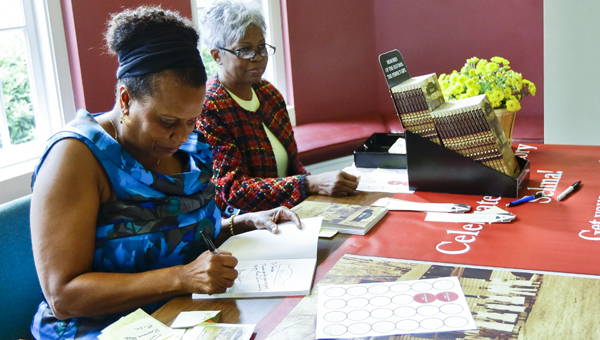 sign me up: Sharon Jackson signs a copy of her book “Images of America: Selma.” She is shown at the Selma-Dallas County Public Library Thursday with Terry Davis.

This week’s Lunch at the Library saw a large turnout, with more than 70 people in attendance to listen to Sharon Jackson talk about her book, “Images of America: Selma.”

“[It was a] fantastic turnout. A great diversity of people, which shows how amazing Selma is,” said Becky Nichols, Selma-Dallas County Library director. “We see people across all different paths and walks of life who are committed to this town and came together to celebrate.”

Guests said they enjoyed listening to Jackson and found her book and her lecture to be informative and interesting.

“I was really interested in meeting this author, particularly because I am a transplant myself to Selma,” said Betty Jo Butler, a Selma resident. “I came here three years ago to help with disaster relief efforts and just fell in love with the city and the people and stayed.”

Like Butler, several of those in attendance are not originally from Selma, and even one visitor was from Connecticut.

“I had taken some of the local tours, but it’s always really good to sit down and hear somebody that’s gone through archives and knows some of the inside stories,” Butler said. “I think what’s great about this town, is it has such a mix of history.”

Everyone seemed to enjoy looking at the photographs, from the Billy Rosenburg collection, that Jackson made such a huge part of her book.

“I think what was really my favorite part was seeing some of the images of the original people,” Butler said. “To actually see the faces that represent the people of the era, I think that was really exciting for me. “

In her lecture, Jackson talked about the beginnings of Selma, and how it was founded. From there, she talked about different families that have lived in the Queen City, and of course talked about the Civil Rights Movement. In her book, Jackson also mentions the struggles for equality and the Women’s Suffrage Movement. Lastly, Jackson reviewed some of the architecture and presented images from a culturally and economically booming Selma.

“I think it’s quite a little hidden treasure of the United States that people really don’t realize,” Butler said. “I really believe with more efforts like this author, it will stop some of the more negative comments [about Selma].”

Farms, cities come together for breakfast