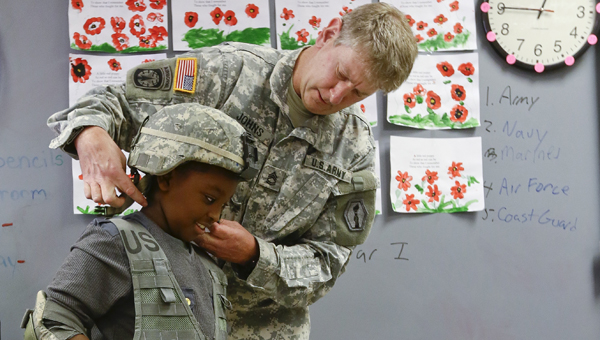 Valley Grande Elementary third-graders received a visit from Army veteran Tim Johns on Monday, and learned what Veterans Day is really all about.

Johns is a retired veteran who served in the military from 1983 until 2012, including tours in both Iraq and Afghanistan.

“I like honoring the veterans, and giving [the students] knowledge of what we do,” Johns said. “I like making [the kids] smile, and I like making them laugh.”

Johns said he wants the kids to take away the understanding of who veterans are and what Veterans Day is really all about.

“Over the last couple of years, we noticed that the kids knew we were out for Veterans Day, but they never really knew what Veterans Day meant,” said Stacie Wells, a third-grade teacher at Valley Grande. “They knew it was about men and women who have served our country and fought our wars, but they thought of it as more of an abstract thing.”

Johns brought several different items that he used overseas, and let the young students have an up close and personal look at them. Some kids even had the opportunity to try on some pieces of a uniform.

Joseph Draime, a third-grade student, said his favorite part of the class was “when we got to hold the rocket launcher.”

Draime said he like being able to see all of the different gear that Johns brought with him.

During the class, Johns told the students about a few of his experiences at war, and how some of his brothers and sisters in arms were not able to make it back home.

“We’ve talked about them losing brothers and sisters in battle, but they never really think about it as that relationship and it being one of their friends,” Wells said. “The emotion of which [Johns] spoke with, and for the kids to be able to see that, it was huge.”

Besides trying on parts of a uniform and holding a rocket launcher, kids also learned about the different branches of the military, who veterans really are, the difference in Veterans Day and Memorial Day and Arlington National Cemetery and the Tomb of the Unknown Soldier.

“If nothing else, I hope that what [the kids] take away from it, is that this is an actual personable relationship that the men and women have done for them, not just personally for themselves and for their own families, but for everybody’s families,” Wells said.