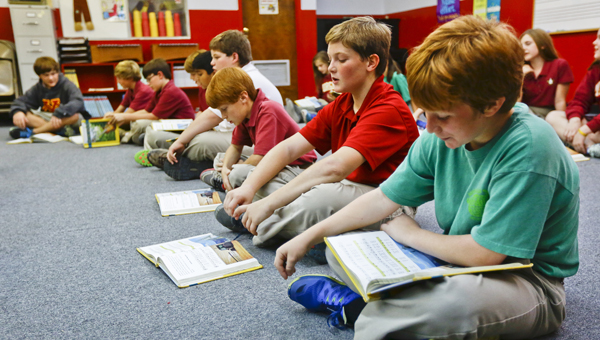 Debbie Anderson’s class at Morgan Academy rehearses for the veterans program, which will be put on Thursday at the school.

Patriotic songs will ring through the halls of Morgan Academy on Thursday.

Morgan Academy’s choir is holding its Star-Spangled Production Nov. 6 at 6:30 p.m. to honor the nation’s veterans.

Debbie Anderson, the choir instructor at Morgan, has been teaching at the school for 19 years and has put on similar performances in the past.

Although it’s been many years since the last veteran’s performance, Anderson said she is excited for the program and the students are well prepared and ready to go.

“We have lots of patriotic songs we’re going to sing,” Anderson said. “It’s just something for the kids to do to give back.”

Students were all smiles while rehearsing for their big day and seemed excited to be able to perform for their families and the community.

While learning the songs, students also learned about the branches and different aspects of the military.

Anderson said she is hoping kids take something away from the program and continue to honor veterans later in life.

“If they learn these songs now, it will be with them always,” Anderson said. “They wont forget them later on.”

Hasten Bridges, a sixth-grader in the choir said he has really enjoyed preparing for the event, and he is eager to perform.

“I’m really excited because we’ve been practicing it for awhile, and we get to sing and read and learn more about the songs,” Bridges said. “It’s really fun because we are learning about the songs … for the veterans program. We have a lot of fun.”

Around 130 students from grades third though sixth will be performing on Thursday, singing songs like The Star Spangled Banner, America the Beautiful and songs about different branches in the military.

“The kids are really into it, we’ve learned a lot of things,” Anderson said. “It’s peaked their interest in the military.”

In addition to the children singing, there will be guest speakers talking about their experience in the military or being a loved one of a veteran. The White Knights from Marion Military Institute will also be in attendance supporting the young singers.

Anderson is hoping for a great turn out and is encouraging everyone to attend, especially veterans.

“Everybody is invited,” Anderson said. “[We want to] invite the community in to hear the children sing.”

Shoppers get preview of Christmas season