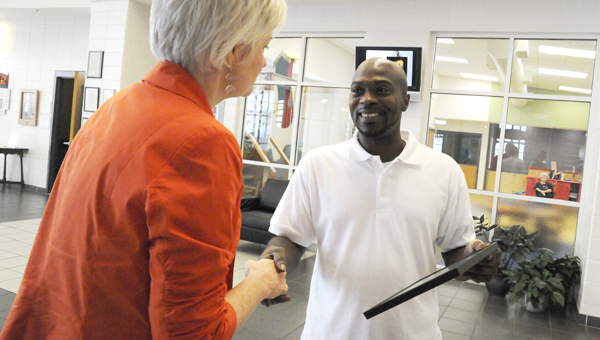 Stallworth was at loss for words when Commerce Director Sheryl Smedley visited his workplace to bestow the honor.

Presented each month, the award recognizes those who display outstanding customer service.

“I don’t know what to say,” said Stallworth, who has been working at the YMCA for more than year. “They make me feel very comfortable here. It’s a good place to work.”

Ann Murray, CEO of the YMCA of Selma-Dallas County, felt Stallworth was much deserving of the honor, since he is so determined and driven to complete his job.

Murray recalled Stallworth, who she described as a self-motivator, spending long nights cleaning up the YMCA following its summer camp days. Murray said she was pleased to return to a “spotless” building each day.

“He is one the hardest workers I have worked along side of,” Murray said. “He’s upbeat and encouraging to everyone, and he is a team player.”

Stallworth said it’s in his nature to go above and beyond to complete his duties, which includes collecting trash left in the parking lot, cleaning desk chairs, mopping the floors and more.

“This is something I like to do,” Stallworth said. “I guess it’s just in me to see something that needs to be done and figure I have to do it.”

Smedley said Stallworth’s nomination to for the award stood out, because it highlighted the custodian’s reliability.

“He is always dependable,” said Smedley. “He gets the job done, and he always does it with a great attitude.”