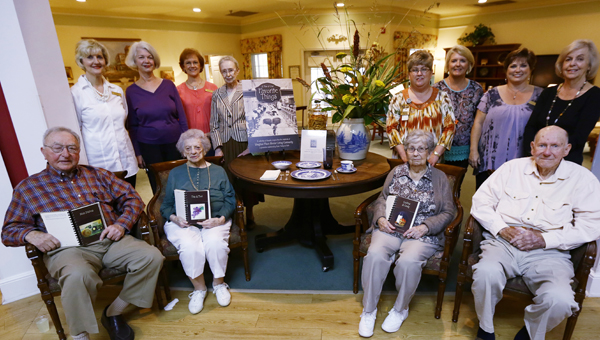 That’s exactly why Vaughan Place Senior Living Community residents put together a cookbook, titled “A Few of Our Favorite Things,” which combined all of their favorite recipes as well as artwork from current and past residents.

“We had a fabulous time doing this and getting it together,” said Karen Morris, community health educator at Vaughn Place. “We started, and we worked a lot of hours getting the recipes from every resident.”

Morris was the mastermind behind the project, coming up with the idea and getting everyone involved in creating the cookbook.

All of the current residents and many family members of past resident had the opportunity to submit 10 recipes from which the best would be chosen. Some residents submitted more, some even giving 25 recipes to be gone through.

Dianne King, activity coordinator at the specialty care unit, said the project was successful, and she had a 100 percent participation rate with the residents in her wing.

“It’s been a wonderful community event,” King said. “[The residents] were so excited about giving the recipes to us.”

Once they received the news about making the cookbook, residents began digging through old recipes, trying to find that magical set of instructions.

“They dug through the recipes, and the memories came [out],” King said. “They would come in with their little packet, and little tears would roll down their face, giving me their packets of the memories that came out.”

After making the selections of what recipes would go into the book, it was decided that they would add artwork from the residents to the book.

“We decided that we had so many artists here, that we would get their artwork,” Morris said. “It’s some fabulous artwork, and we felt that having the artwork really helped a lot.”

Along with the artwork, some of the recipes have an added bonus.

Some residents were able to write a memory they had of their dish and the time when they made it, which was added at the bottom of the recipe.

Alabama Hush Puppies, a recipe by the famous Kathryn Tucker Windham, is listed as the book’s favorite recipe.

Windham, along with many other residents that have passed, have recipes in the cookbook.

“This place has honed a lot of special people,” King said.

After its completion, the cookbook was entered into a community cookbook competition sponsored by Morris Press Cookbooks.

The competition had 500 entries, and Tuesday, Morris was notified that Vaughn had been chosen for the top 10.

A lot of hard work was said to have gone into the cookbook, and many people contributed to its success.

Residents, staff members and volunteers worked together to make the book the hit that it is.

The results of the winners will be released in January. Until then, Morris and King are encouraging everyone to purchase a copy of the book.

Copies of the book can be purchased at www.cookbooks4sale.com, local stores and at the living community.