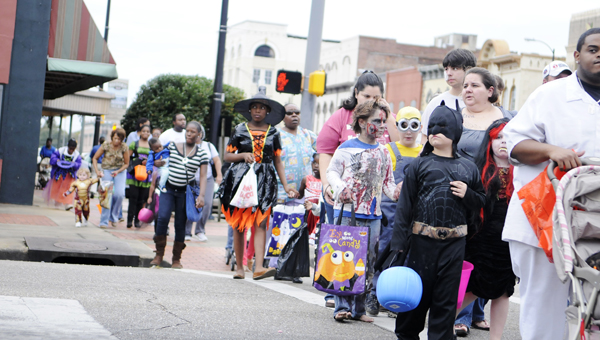 The annual Monster March will begin Friday at 3:45 p.m. in front of the Selma-Dallas County Public Library.

Goblins, ghosts and trick-or-treaters are sure to fill the streets Friday for the most haunted day of the year.

Halloween is arriving, and bringing the month to a close are children’s activities around town.

To go along with the normal trick-or-treating, the annual downtown Monster March, and activities at the Selma Mall will keep the kids busy.

“We do it for the children,” said Shebra Kidd, director of the downtown Selma association. “[We] hope the kids come out and participate.”

The Monster March, back for the 30th year, will start in front of the Selma-Dallas County library at 3:45 p.m. Kids will have the opportunity to have their faces painted before beginning the walk.

During the march, children are led down Broad Street where merchants will pass out candy and have fun with the kids.

After the march, there will be a costume contest at the Performing Arts Center, where someone will be awarded the Miss Kitty Windham award for the most original costume. The only rules for the contest are that children must be 12 and younger, and they have to be in a costume to be entered.

Windham was the former director of the downtown Selma Association, and Kidd made the award in her honor after her passing.

“I think [it’s been a success] because it gives the kids something to do,” Kidd said. “All of the merchants like to participate in it so it’s great for the children because it’s something for them to do that people care about.”

The Selma Mall is also handing out treats from 4 p.m. until 6 p.m. for ages 2-12, along with their own costume contest. The categories are most original, cutest and scariest costume.

The Mayor’s Office has set the designated trick-or-treating time to be from 4 p.m. until 8 p.m.