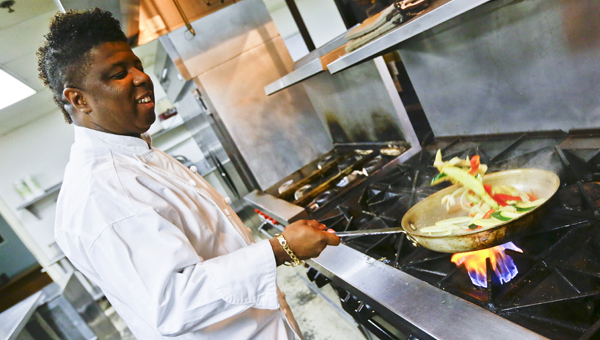 Carlos Brown has joined the St. James Hotel as head chef. The hotel restaurant is planning for a “soft” opening on Monday, Nov. 10 so people can try the new menu and meet Brown.

A new chef is in town, and he’s ready to excite the taste buds of the Selma community.

Chef Carlos Brown, a native of Charleston, S.C., moved to Selma from Atlanta to work as head chef at the historic St. James Hotel.

Brown has been working in the culinary industry for more than 25 years and has catered to many celebrities in his time.

“Cooking is an experience. It’s not just cooking the food that makes it interesting to me, it’s where it comes from,” Brown said. “When people eat my food, they taste my heart.” 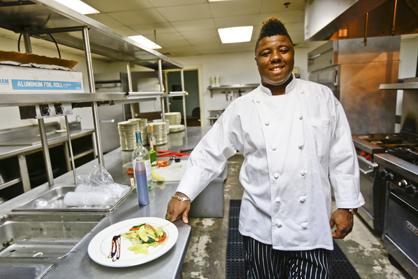 Brown is a native of South Carolina.

To the chef, food involves passion and a desire to satisfy those that eat his cuisine.

“Food, to me, has to come from the heart,” Brown said. “I think that’s what separates me from a lot of other chefs.”

Brown credited his mother and grandmother as the inspiration for his path to culinary artist.

“I have the greatest grandmother and mom,” Brown said.

Coming from a line of people who like to cook, Brown was destined to be a professional chef.

His favorite dish he plans to add to the hotel’s menu is actually a family recipe of shrimp and grits.

“It represents where I’m from. There’s nothing like low country shrimp and grits,” Brown said. “It’s a simple family recipe, but it’s so unique, and it separates from everyone else.”

Along with creating a top-notch menu, on the top of his to-do list is training the staff to have excellent customer service.

“[Customer service] can make you or break you,” Brown said.

Fresh ingredients are of up-most importance to him, and he said he plans on only using fresh vegetables and fresh catch seafood.

He has plans to utilize local farmers and build an herb garden by the hotel..

“We want to be able to support some of our local farmers,” Brown said.

Right now, Brown is focusing on getting the restaurant open, but he also has bigger plans for the future.

He is currently working on a book called “Saving Hospitality” and plans to bring his summer camp for at-risk kids to Selma.

“I want to see not just the restaurant open, but I want to see the community down town turned around,” Brown said.

He plans on having a soft opening on Monday, Nov. 10 to let people come out and see what he’s all about. He said he’s excited to open, and looks forward to meeting everyone in the community.

Montevallo author to speak at library

Montevallo author Mike Mahan, author of “No Hill Too High for a Stepper,” will speak at the Nov. 6 Lunch... read more