Cook off features wild game from all over the state 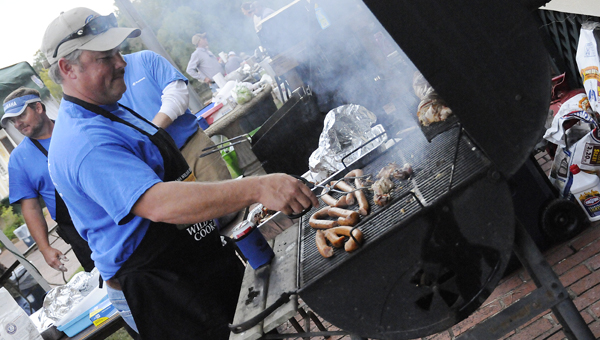 Cook teams traveled from around the area to the St. James Hotel Thursday night for the Alabama Wildlife Federation’s Wild Game Cook Off and the food did not disappoint.

Wild turkey enchiladas, smoked turkey breasts, blackened trout, squirrel kabobs and duck wraps were among the dishes grilled by the handful of cook teams competing for the titles of top fowl, fish, wildlife and best overall.

Chonita’s Cooking out of Alex City, who won the 2014 state competition with their big buck pizza, brought the dish back Thursday to give it another go.

This is their third straight year doing the competition in Selma and like the patrons that lined the streets in search of great food, they can’t get enough.

“We just love it. There’s good camaraderie, a lot of fun and good people down here,” Mark McGrady with Chonita’s said. “We bring a different three dishes down here every year — the game division, the fowl division and the fish division.”

Tim Wood, one of the co-organizers for the event, had a wild concoction for those that came to his table.

He called it “everything wild,” which was a fair description of what was in it.

“Don’t ask me to replicate it,” Wood joked. “I went to the freezer and started pulling out whatever we had in there. Whatever thawed, we cooked it.”

The dish included deer, quail, dove, some onions, sour cream and lettuce, among with many other spices. Wood’s food, like that at many of the other tables, seemed to get the approval from those in attendance because it was going quickly.

“We are just having a good time. Young kids are here, grown ups are, all kinds of people are here,” Wood said. “This is just a great event to raise money for the Alabama Wildlife Federation.”

The cost to attend the event was $50 for a single ticket or for a couple and included a membership to the AWF.

Paul Garner provided live music at the event and a silent auction was also part of the entertainment.

Selma’s Devin Gary fights for a pass with a Brookwood player during a game earlier this season. Selma can clinch... read more