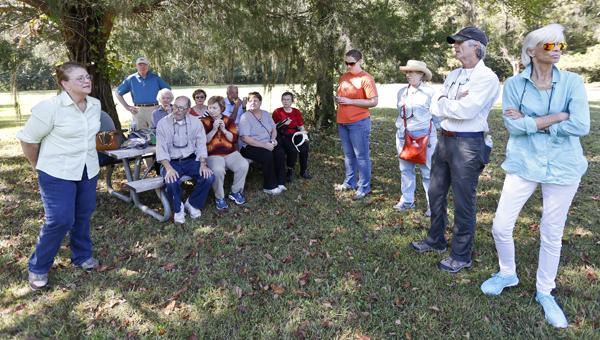 The Old Cahawba Archaeological Park offers an experience like no other, giving guests a glimpse into the incredible past that Alabama has to offer.

Although the park is open at other times, during the month of October, they offer special tours that cater to a wide variety of people.

On Saturday, a special tour was set up to “hear the dead speak” through different artifacts that those who walked the land long before had left behind.

“Sometimes people will say, ‘oh, there’s nothing at Cahawba’ so this is the point, to open people’s eyes that there is historic stuff everywhere out here,” said Linda Derry, Cahawba’s site director.

“Preservations are more than just buildings, it’s the relic landscape, it’s the archeology, so this tour really opens your eyes.”

The tour goers were shown a gravesite that had been there for over a century, a well that is thought to be from the time period when the state capitol was in Cahawba, plants that are believed to have been there from that period and before, and much more.

“Today wasn’t about ghosts at all, it was just about messages left behind by the long dead residents, left for us to read and learn about them,” Derry said. “Today is more about history and archeology, and above ground archeology.”

There were guests from Tuscaloosa, Birmingham, Montgomery and more that traveled to get to experience a blast from the past.

“It’s very gratifying for us here at Cahawba [to have people from all over the state travel for the tour],” Derry said.

By having people travel to Cahawba, they are helping keep the park up, and at the same time giving back to the economy in Dallas County.

“We also think of ourselves as good citizens in Dallas County,” Derry said.

The tour gave people the opportunity to step back in time and imagine what life was like long before they ever took a step in Old Cahawba.