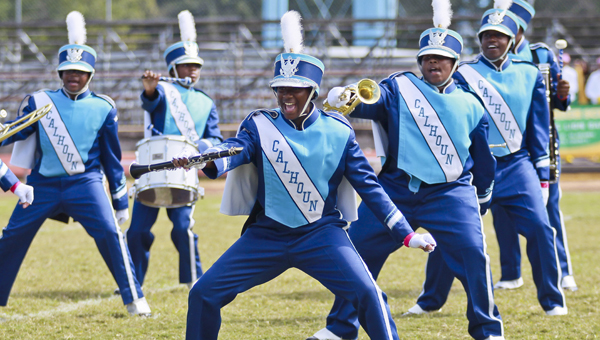 The Calhoun High School Marching band performs its halftime show during the Battle of the Bands competition Saturday at Memorial Stadium. –Alaina Denean

The sound of percussion instruments and jazzy tunes filled the air at Memorial Stadium Saturday, as bands from around the state competed for high honors at the Central Alabama Marching Band Festival.

The home side of the stadium was packed, with nearly every seat taken. A total of 16 bands showed off their talents in Saturday’s Battle of the Bands, and they did not disappoint.

“The bands out here today were great,” event organizer Oscar Watts said. “I’ve seen such improvement from the first two or three years [of the competition]. There are more quality bands.”

Minor, who won the national high stepping competition last year, was named the event’s grand champion. The grand champion designation goes to the team with the best overall score, regardless of class.

Central Tuscaloosa won best in class in the A division and also won the best overall drum major, regardless of class.

“This is all about the bands. A lot of times the kids will perform at football games and might have five or ten minutes,” Central Tuscaloosa band director Marvin Turner said. “We have to be worried about the time going on the field and off the field, but out here the kids can enjoy it. They don’t have to worry about rushing their show.”

Wenonah, which scored “superior” in the drum major, dance line, percussion and band categories, won best in class in AA.

Minor, South Gwinett High School of Georgia and Anniston High School were the only bands to receive a score of “superior” in every category.

Bands were scored on a three-point scale, with a rating of superior, excellent and good. No band received lower than a score of “excellent” in any category.

Proceeds from the event go to the Selma High School marching band, who as the host school did not participate Saturday.

“We did very well last year and bought our new uniforms last year,” Selma High School band director Brandon Williams said. “This was the festival that helped us do that. We have done pretty well again and we are hoping to get some new band equipment and do some other things as well.”