Panthers in need of a win versus Clarke 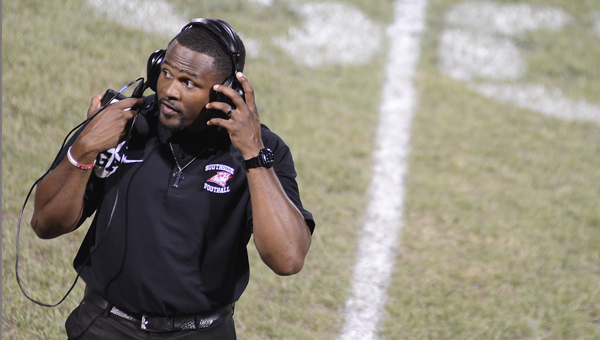 Southside head coach Daniel Flowers knows it’s now or never for his Panthers to make a playoff push. The Panthers have not made the postseason since 2005, but entered the season with hopes of ending that streak.

Without a win Friday against Clarke County, those hopes will come to an end.

“It’s the biggest game of the season, because it’s the next game,” Flowers said. “Knowing that we have to win to have any chance at the playoffs, so this game is big.”

The Panthers currently sit in sixth place in Class 4A, region 1 with a region record of 1-3.

Clarke County is on the opposite end of the spectrum and at 3-1 in region play looks headed for the postseason.

A Southside loss, paired by a win by either Satsuma or W.S. Neal eliminates the Panthers from the playoff hunt.

Unfortunately for Southside, Satsuma and W.S. Neal play Friday night, so one of the two teams are going to win.

The Panthers road to the playoffs will take a win Friday, paired with another over W.S. Neal next week. Plus, the Panthers will need a lot of help.

But, the first task is to win this week. Khamari Gibbs is back at quarterback for Southside after injuries slowed him down to start the season. Flowers said he looked good last week against UMS-Wright.

“It’s more capable of the big play,” Flowers said of his offense with Gibbs in the game. “It opens a lot more things when Khamari is in there for us.”

Flowers said Gibbs is more of a runner than Scott Cole, who has played quarterback in Gibbs’ absence.

It hasn’t been easy for the offense having two different signal callers all year, Flowers said.

For a lot of the season, the Panthers offense has been effective enough. The Southside defense is another story.

The Panthers have given up over 35 points in three of their four region games and now face a team that has scored 35 or more in four straight games.

“They are athletic, have big receivers on the outside and their quarterback is very athletic too,” Flowers said. “The offensive line is going to block you and the defensive guys are going to hit you. We are going to have our hands full.”

Flowers knows his team needs to play better all over the field in order to pull the upset Friday.

“It’s very winnable if our kids go out there and play,” Flowers said. “I think we will have a chance to win it. It will come down to the kids’ attitude and if they believe, we can win.”

Meadowview and Freedom will finally play Friday night, after lightning and bad weather stopped the players from taking the field on the game’s originally scheduled date of Sept. 12. The Trojans come in needing a win in the worst way after losing their last four games. Freedom defeated EFCA 70-54 last week.

WHAT TO WATCH:  The last thing anybody wants to see is more rain at Meadowview after last week’s game was also delayed because of storms. There’s good news to: The forecast shows a low chance of rain.

With a win last week against Akron, it’s possible Keith (1-6) has turned its season around. The Bears face Sunshine (2-3) Friday night with their playoff hopes still intact, but needing a win and a lot of help to get into the postseason.

SERIES HISTORY: Keith has won all four meetings between the two teams since 2010. The Bears have outscored the Tigers 159-19 in those meeting.

WHAT TO WATCH: Keith has the county’s longest running streak of playoff appearances at six. With a loss Friday, that streak would end.

After a region win last week against Wilcox Central, the Hornets (2-5) will host Calera (6-1) Friday night in Plantersville. The Hornets have shown improvement the last two weeks after a big win over the Jaguars and a close call against Central Tuscaloosa.

WHAT TO WATCH: The Hornets need a win over Calera to keep their playoff hopes alive going into the last two weeks of the year.

It’s a familiar story for Morgan Academy (0-7), as the Senators will hit the road again Friday night for a game against Fort Dale (3-4). The Senators are still looking for their first win after being shutout 51-0 by Escambia Academy last week. Fort Dale also comes in off of a loss after falling to Monroe Academy 48-24.

WHAT TO WATCH: In Fort Dale, Morgan Academy will play its first opponent with a losing record all season.

Although Friday night’s game between American Christian Academy (3-4) and Ellwood Christian (3-4) is a non-region game, it’s a chance for the Eagles to get their season turned around. Ellwood has faced 1A heavyweights Linden and Maplesville the last two weeks and the results have not been pretty.

SERIES HISTORY: Friday’s meeting will be the first between the two schools.

WHAT TO WATCH: Ellwood’s season started with such high hopes, including a 2-0 start.  A forfeited game to Sunshine and three straight losses make that seem like a long time ago. Can the Eagles get it turned around in time to make a postseason push?