Organizations team to teach about diabetes 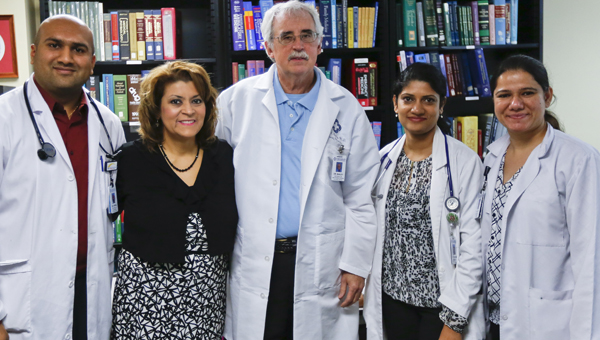 By Sarah Robinson and Alaina Denaen

With diabetes prevalent in Dallas County, local organizations are offering information and support to area residents affected by the disease.

The Dallas County Extension Office and UAB Selma Family Medicine hosted separate gatherings this week to discuss diabetic diet, appropriate medication usage, maintaining a health lifestyle and more. Both gatherings were centered on the concept of those affected by illness supporting one another.

“This idea has actually been going for quite some time,” said Dr. Aditya Nirmal, a resident at the UAB Selma Family Medicine clinic. “It’s actually picking up across the country where doing group sessions actually helps people deal better with their diabetes.”

Approximately 434,8000 Alabamians have been diagnosed with diabetes, according to the Alabama Department of Public Health.

The Centers of Disease Control and Prevention’s website described diabetes as a disease in which blood glucose levels are above normal.

In Type 1 diabetes, the body does not produce insulin, a hormone that is needed to convert sugar, starches and other food into energy needed to live, according to the American Diabetes Association.

And the most common form of diabetes, Type 2 diabetes causes blood glucose levels to increase higher than normal, according to the association.

While living with diabetes may be challenging, diabetics can live a relatively normal life if they follow certain steps.

Some of those steps were outlined in both the Dallas County Extension Office and UAB Selma Family Medicine’s classes this week.

The extension office held the first of its Power to Prevent Diabetes Classes Tuesday at the Orrville Community Center. The free classes will continue to be held at the center for the following five Tuesdays, with each meeting beginning at 10 a.m.

Dorothy Chatmon, with the Dallas County Extension System, said learning about the proper food to eat, the proper way to cook it, useful fit tips and other information can make living life as a diabetic easier than having no education on the illness at all.

“It’s important that we teach the few, so they can go home and teach the many,” said  Chatmon, the educator for the Power to Prevent Diabetes Classes.

The UAB Selma Family Medicine Inc. met Wednesday at its facility on 1023 Medical Center Parkway for its regularly meeting, held the second Wednesday of each month.

Patients there were able to meet with doctors to get a normal check up and share their personal experiences with other diabetics.

“The group is planned in a way, that we’ll have people who are very uncontrolled, somewhere in the middle and someone who’s a well controlled diabetic,” Nirmal said.

“It’s amazing to see how the controlled will motivate the others.”

For more information, call Chatmon at 875-3200 or Kandice Collins, the program coordinator for UAB Selma Family Medicine Clinic Inc. at 874-3463.