Toborius R. Sheppard, 17, was charged with one count of first-degree domestic violence assault. He is currently in Dallas County Jail under no bond, according to Lt. Curtis Muhannad, with Selma PD. 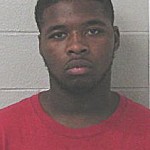 The Selma Police Department responded to the 1800 block of Old Montgomery Highway Saturday at 12:38 a.m. in reference to a stab victim and was directed to Sheppard, Muhannad said.

“The assault occurred after a verbal altercation, in which his uncle attempted to verbally discipline him about attending school and staying out of the streets,” Muhannad. “The verbal altercation became physical, in which Sheppard pulled a knife and stabbed his uncle twice in the back and once in the chest.”

After making contact with the victim at the Vaughan Regional Medical Center ER, officers learned he was  being sustained for travel to a Montgomery-area hospital.

Muhannad said Saturday evening that the victim was last reported as being in critical condition.

First-degree domestic violence assault is a Class B felony.

If convicted, Sheppard could be facing anywhere between two to 20 years in prison and $30,000 in fines.