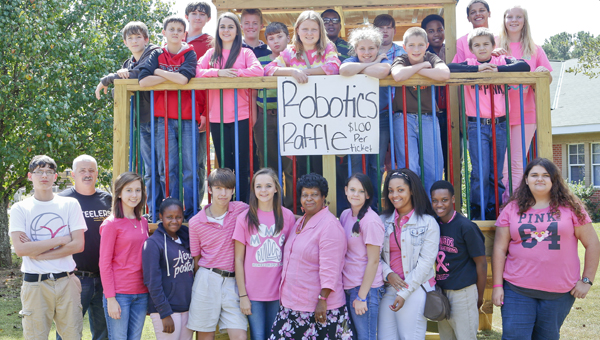 The Martin Middle School Robotics Team stands with the children’s fort they designed and built. The fort was created to raffle off, and help raise money for the team to compete in their regional competition. (Alaina Denean | Times-Journal)

The Martin Middle School Robotics Team is in its fifth year, and is looking to top off a great class with a win at its regional competition in about six weeks.

“The main thing behind the program, is for the kids to learn a lot of hands-on activities, problem solving, [and] group work,” said Gaylen Denson, the Robotics Instructor at Martin Middle School.

“Big Blue Going Green” is the theme for this year’s team, as they look to promote environmental safety while building their different projects.

The robotics team has to raise its own money for the costs of materials and other building expenses to get to the competition, which is hosted by Wallace Community College Selma.

“We have to raise our own money, so we thought the best way to raise money and learn some things about problem solving and about construction issues and engineering issues was to actually design and construct an item,” Denson said.

The students, with the help of some community members, were able to work together and build a fort for children.

“[The students] learn to work together so much, and they learned to problem solve when they came to an issue at hand, and they were able to work through it together and figure out what it took to solve the problem,” Denson said. “Marvin’s Building Material helped us a lot with donating some items for it.”

The students are selling raffle tickets for the fort, and they are hoping to raise $1,600 by Tuesday.

“This is hopefully going to give us enough money to make it through the competition,” Denson said.

Colby Whitaker, an eighth grade robotics student at Martin Middle School, said he really enjoys the class and has fun working with his classmates and learning the different aspects of robotics.

“So far, my favorite part has been all of the technological points of everything,” Whitaker said. “I’m in the PowerPoint group, so I’ve been creating all the PowerPoints and anything that has to do with making anything with the computer.”

Whitaker said designing and building the fort was exciting, and he likes having the opportunity to build something from scratch.

The students worked on the fort every day for about an hour for six weeks before completing the project.

“The kids designed the project, they figured out how much material we needed and then they, themselves, constructed the item.”