Ole Miss rallies past No. 1 Alabama for upset win 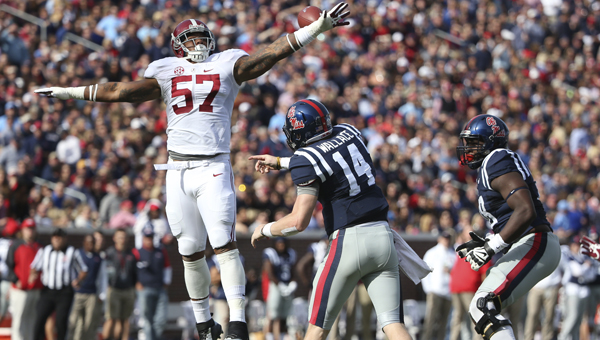 Alabama linebacker D. J. Pettway tries to knock down a pass thrown by Mississippi quarterback Bo Wallace during Saturday’s game in Oxford. Wallace and the Rebels pulled the 23-17 upset over the No. 1 ranked team in the coaches poll, Mississippi’s first ever win versus a top-ranked team.–Kent Gidley | University of Alabama

OXFORD, Miss. (AP) — Brushing aside a carnival-like atmosphere and Alabama’s potent defense, Mississippi quarterback Bo Wallace bounced around in the pocket and threw one perfect pass after another, willing the Rebels downfield in the fourth quarter.

Two touchdown passes and one stunning comeback later, No. 11 Mississippi had a 23-17 victory over No. 3 Alabama on Saturday and asserted itself as a true contender in the Southeastern Conference Western Division.

“We worked hard for this moment,” said Ole Miss receiver Laquon Treadwell, who caught a touchdown pass. “And as (the final seconds) happened, I thought ‘This isn’t the end of it all. It’s just the beginning.’”

Wallace threw for 251 yards and three touchdowns, including a go-ahead 10-yarder to Jaylen Walton with 2:54 remaining.

It capped a methodical, nearly flawless fourth quarter for the Rebels (5-0, 2-0 SEC), who have won five games to start the season for the first time since 1962 and ended a 10-game losing streak against the Tide.

When it was over, drinks flew into the air and students rushed the field in disbelief, celebrating what may be the biggest win for Ole Miss in a generation. It also capped a stunning day for the Magnolia State — No. 12 Mississippi State beat No. 6 Texas A&M 48-31 earlier Saturday in Starkville.

The Rebels trailed 17-10 midway through the fourth quarter, with a brutally efficient Alabama offense controlling the tempo. But Ole Miss pulled even on Wallace’s 34-yard touchdown pass to Vince Sanders with 5:29 remaining.

A few plays later, Wallace found Walton in the end zone for the lead.

Alabama (4-1, 1-1) still had a chance to win, driving the field quickly in the final minutes, but Senquez Golson intercepted a pass from Blake Sims in the end zone with 37 seconds remaining.

Golson’s interception was an acrobatic catch in the back of the end zone after the long heave by Sims. He was originally ruled out of bounds, but replays showed he cradled the pass with his left hand and landed just inside the end zone.

After the call was confirmed by the officials, a euphoric stadium erupted. Students hung from the goal posts after the game and eventually pulled one down, carrying it across the field in jubilation.

Wallace completed 18 of 31 passes, saving his best for last.

The confident — sometimes even brash — senior has often had a gunslinger’s reputation in the past, mixing great passes with inexplicable interceptions.

But he kept mistakes to the minimum Saturday, coolly leading the Rebels when they needed him most.

“He made some big-time plays,” Ole Miss coach Hugh Freeze said. “He just played so solid. On that last touchdown, that ball was right where it needed to be for us.”

It was a surprise ending to a game Alabama controlled most of the day. The Rebels won despite being outgained 396 to 323.

“We did not finish the game like we needed to,” Alabama coach Nick Saban said. “I think the question for our team is, ‘How do you respond to a loss?”

Sims was coming off a 445-yard, four-touchdown performance against Florida two weeks ago, but couldn’t provide any heroics on Saturday.

It was an electric atmosphere before the game. Ole Miss was hosting ESPN’s College Gameday for the first time in school history and the school’s famed tailgating area — the Grove — was overflowing with fans anticipating the biggest game on campus in more than a decade. Even pop star Katy Perry made an appearance on a gorgeous, sunny day in north Mississippi.

But eventually, the party had to move to Vaught-Hemingway Stadium.

And somehow, it became even wilder.

Ole Miss jumped out to a 3-0 lead by the end of the first quarter, but Alabama responded with a 12-play, 68-yard drive midway through the second quarter that ended with Sims’ 1-yard touchdown run on fourth down.

But Alabama’s biggest play — by far — came a few minutes later. Cyrus Jones stripped the ball from Ole Miss running back I’Tavius Mathers, scooped it up and ran 13 yards untouched for a touchdown and a 14-3 lead.

Television replays showed Jones grabbing Mathers’ face mask on the play, but it was a non-reviewable call so the touchdown call was allowed to stand.

An angry stadium showered the officials with boos going into halftime, but the damage was done.

The no-call hurt the Rebels, but so did an ineffective offense. Ole Miss gained only 105 yards in the first half as the Alabama defense stuffed the Rebels at almost every turn.

Auburn quarterback Nick Marshall runs for a touchdown in Saturday’s game against LSU. The Tigers won the game 41-7 to... read more