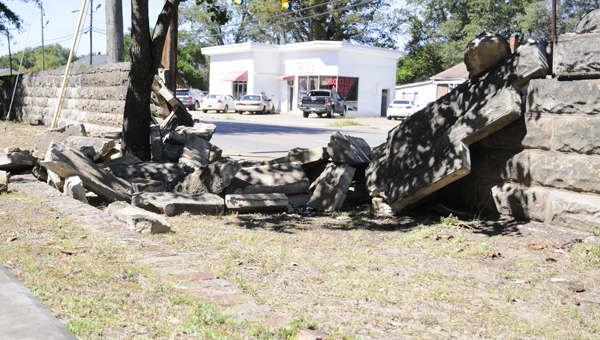 The brick wall alongside Old Live Oak Cemetery has been damaged several times this year.

A hole in the wall at Old Live Oak Cemetery will be fixed as soon as possible, according to cemetery officials.

Mike Pettaway, superintendent of the city cemeteries, said nothing can be done until the police report is released and the insurance companies make their decisions. Once that happens, he said the wall should be

fixed within a few days.

The details of the accident that caused the damage to the wall have not yet been released.

“We have to wait on the insurance companies for whoever hit it, “ Pettaway said. “It will be next week before the police report will be ready.”

There were not any plots damaged and at this point Pettaway is not sure what the cost to repair the wall will be. Finding bricks to replace the wall may be the biggest challenge of all.

“Used to they could get the stones from old houses in Selma that were torn down but you don’t see many of these houses anymore that have these stones in them,” cemetery worker John Coon said. “The problem becomes making use of what we’ve got and scrounging out of the wall on the north/south back wall of the cemetery.”

Pettaway said the first option will be trying to replace the wall with the bricks that were knocked down.

The accident is believed to have happened over a week ago. Coon said this will be the third time this year the wall will have to be repaired.