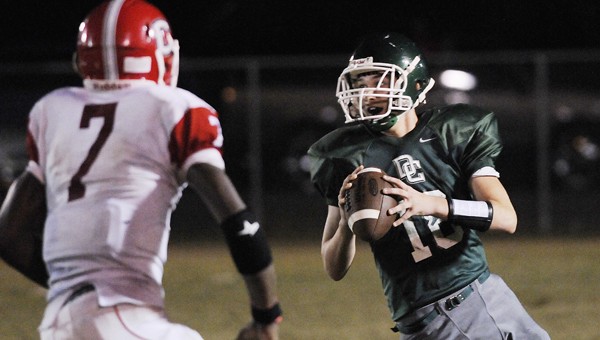 Dallas County quarterback Lane Wallace looks for an open receiver in the final seconds of Friday night’s 45-40 loss to Central Tuscaloosa. Wallace and the Hornets led 40-33 with 3:01 left, but the Falcons stormed back for a key region win.–Daniel Evans

PLANTERSVILLE — Dallas County was set to give its fans a homecoming to remember Friday, but Central Tuscaloosa stole the show.

The Falcons (4-2) scored two touchdowns in the game’s final three minutes to storm from behind for a 45-40 win over the Hornets (1-5). After Central recovered an onside kick, Falcons quarterback Tyler Bell connected with Eldric Jones for a 40-yard touchdown that put his team on top for good.

“This one stings, this one hurts because they see that play in the first quarter if we had done something different it could have changed the momentum of the game,” Dallas County head coach Marty Smith said. “It wasn’t just what took place at the end of the ball game.”

For Central, Friday’s game was the second close win in a row after defeating Paul Bryant 40-37 last week.

“Our guys are finding a way to win,” Central head coach Dennis Conner said. “We never did get frustrated. We kept on banging and kept on doing things right and for some reason the defense just didn’t play well tonight but the offense had our back tonight.”

After Jones’ score, the Hornets had one more chance with the ball, but quarterback Lane Wallace was intercepted as time expired.

For Dallas County, it all slipped away so fast.

The Hornets led 40-33 with 3:01 left to play, but Bell led the Falcons down the field for a quick score. He threw a touchdown to Kendrell Walker for a 16-yard touchdown with 1:35 remaining.

The Falcons elected to go for two to take the lead, but Bell was stopped in the backfield.

Central’s onside kick bounced off a Hornets’ player and the Falcons recovered. Two plays later, Bell found Jones to complete the comeback to give Central a 45-40 lead and a key Class 5A, Region 4 win.

The Hornets appeared to be on the brink of a big win — the kind of win Smith has been chasing since he took over the program earlier this year.

“This could have been a win that spring boarded us to the next level, but I’m not sure we truly understood how to lose and what it meant to lose,” Smith said. “I’ll say this, I wouldn’t want to be playing us the next four weeks, as long as we stay together.”

The game was back and forth the entire way. Dallas County struck first on a 42-yard touchdown run by Jermere Jackson with 8:38 left in the first quarter.

Bell answered with his first of six touchdown passes on the night, finding Kyler Sanders for a 14-yard score at the 5:52 mark in the first quarter.

The Falcons took a 14-6 lead with 1:35 remaining in the first quarter on a 14-yard pass to Quinterrius Long.

The next score of the game didn’t come until the 2:28 mark of the second quarter, as Dallas County’s JaVarrius Dudly ran a punt back 43-yards for a game tying score. Central answered again, as Bell connected with Malik Hunter for a 12-yard touchdown with 57 seconds left before halftime.

The Hornets recovered a Central fumble on the opening kickoff of the second half. Six players later, Dallas County took advantage of the mistake, as Xavier Knight scored from 4-yards out to give the Hornets a 21-20 lead.

Bell threw his fourth touchdown pass of the night, a 40-yarder to Timmie Gibson with 4:50 remaining in the third quarter, to give Central a 27-21 lead.

Dallas County’ seemed to set the stage for the rest of the game.

Knight ran 23 yards on a second down play at the Central 25-yard line, but fumbled right as he was getting near the goal line. A mad scramble ensued in the end zone and Dallas County’s Delando Atchison Jr. recovered to tie the game 27-27.

In response, Bell led the Falcons down the field, throwing his fifth touchdown pass of the game to Jones with 4:32 left. The Falcons failed on the two point conversion when Jones dropped what would have been a wide open score.

That left Central trailing 34-33 with only a few minutes remaining.

Central will host Demopolis next week, while Dallas County will play at Wilcox Central.