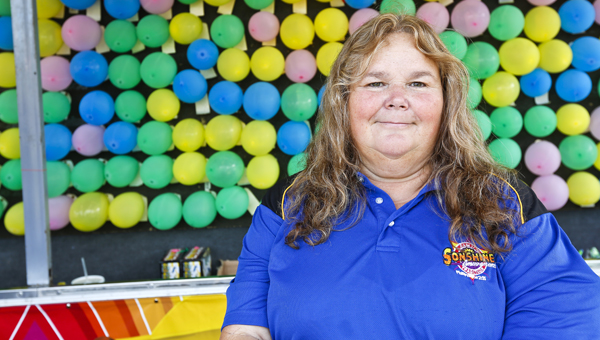 Tammy Barnes is from Illinois but in Selma this week running games at the Central Alabama Fair.. The fair continues through Saturday, Oct. 4.–Alaina Denean

This week the dart landed at the Central Alabama Fair and found itself in familiar territory.

“I was in the homemaker service before I was in this but I enjoy more being part of people being happy and having fun, so I quit that to do this,” Barnes said.

Barnes has been working with the group off and on for about 12 years now and loves her job. She said she enjoys watching the expressions on children’s faces and seeing the excitement that the fair brings.

She said her favorite part about her work is “being a part of making kids and families happy.”

Barnes said she also enjoys the traveling aspect of her job and likes that she is able to see family during the nine months she is on the road.

“I love to travel and meet a lot of people,” Barnes said.

She said she really likes working with her coworkers, and they feel like family to her.

“I just really enjoy the traveling, and the people are really nice,” Barnes said. “We’re like one big family out here.”

Barnes recalled some of her favorite memories throughout her time with the carnival and said that it was hard to pick just one.

“I remember being in Mississippi and a grandma walking around the runway with her grandchildren. It was a school picnic, and she didn’t have the money to afford armbands for her grandkids,” Barnes said. “I made enough money … I went and offered to buy armbands for her grandkids. It was awesome to watch her enjoy being a part of riding the merry-go-round with her grandchildren. It was well worth it.”

Barnes said she is a friendly person with an outgoing personality.

“It’s funny when I hear people say you don’t look like a carnie, and I ask them what’s a carnie looks like,” Barnes said. “They still can’t tell me what a carnie is supposed to look like.”

The ferris wheel at the Central Alabama Fair has been one of the main attractions. –Alaina Denean By Alaina Denean... read more