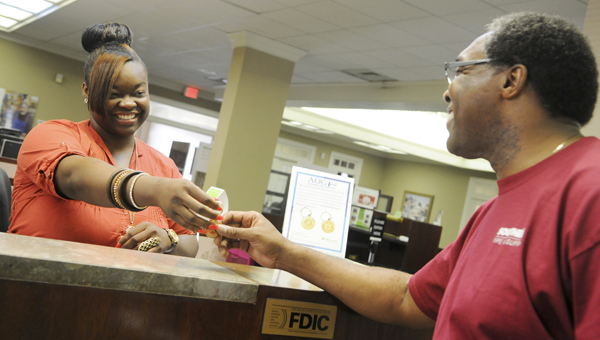 During a quick trip to an area Regions Bank, residents can make a small donation that could help people with dementia who wander from home find their way back to loved ones.

Regions Banks in the Dallas County area are giving customers a collegiate Alabama or Auburn key chain for every $15 they are willing to donate to Alzheimer’s Outreach Group.

Designed to support those affected by Alzheimer’s, the nonprofit organization plans to use the money to fund transmitter bracelets for Project Lifesaver Program.

Lifesaver, an organization dedicated to tracking those with dementia patients who wander, would like to collect enough money to make free bracelets available to those who need them.

“We think that Alzheimer’s is one of those things that so many people are impacted by, and we feel like it’s a very worthy cause,” said Ed McCurdy, the West Alabama area Regions Bank president. “We’re just glad to help.”

The Alzheimer’s Association defines the disease as a type of dementia that causes issues with thinking, memory and behavior.

More than five million Americans are living with the disease, according to the association.

The illness often causes those with it to become disoriented and wander away from home, placing them in potentially life-threatening situations.

Trained emergency responders tied with Project Lifesavers have been able to locate every individual enrolled in its program in about 30 minutes, according to Lifesavers.

The organization says the half-hour period is 95 percent quicker than the average time it takes to find a wanderer otherwise.

Normally worn on the wrist or ankle, the bracelet emits an individualized tracking signal responders are prepared to locate.

While the transmitter can save lives, many can’t afford the device. It costs $300 per bracelet, which translates to $400,000 annually to fund the project for Alabama, according to the Alabama State Troopers Association.

Wayne Calloway, the director of Alzheimer’s Outreach Group, said he’s learned about those in Selma equipped with a transmitter whose lives were saved after they wandered and those who did not have the bracelet and weren’t as fortunate.

“Our desire is to see to it that we keep everybody safe with Alzheimer’s, that they remain safe and to keep our loved ones as long as possible,” Calloway said.

For more information about the Alzheimer’s Outreach Group, call 419-3610 or visit alzheimersoutreach.com.

Tammy Barnes is from Illinois but in Selma this week running games at the Central Alabama Fair.. The fair continues... read more