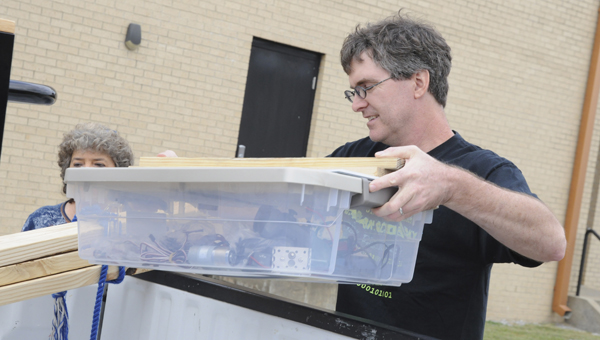 Morgan Academy parent Steve Scheer loads a box full of material given out during Saturday’s kickoff for the Selma Boosting Engineering Science and Technology Robotics Competition.

Local students are gearing up for the upcoming Selma BEST robotics competition.

Selma BEST Robotics offers students the chance to compete against other robotics teams in the region.

“It’s really exciting,” said Judy Bonds, a Morgan Academy science teacher. “We allowed [our students] to come and watch, and they got really excited. We’ve had about 40 to sign up.”

Each year, the competition reveals a new challenge requiring students to build a robot capable of completing a certain task.

During Saturday’s event, competing schools were given more information about this problem, which will require students to work in teams to design and build a vehicle capable of transporting and maneuvering components of wind turbines.

The challenge is meant to address the real-life challenge of designing a vehicle able to carry and move extremely long and heavy structures to assembly sites without negatively affecting America’s transportation system, roads, the environment and more, according to BEST.

Among the teams who joined the kickoff event with plans to compete were Selma High, Keith Middle and High School, Morgan Academy, Martin Middle School, Dallas County High and others.

Selma BEST representatives showed the audience a video displaying details of the challenge and gave schools the material needed to build the robots.

The BEST competition also requires an oral presentation, educational display, project engineering notebook as well as spirit and sportsmanship that account for a percentage of the total score.

The kickoff event will be followed by Mall Day, which is held the weekend prior to competition.

Mall Day gives students a chance to test their robots on the playing field, so they can know if any adjustments need to be made before the big day.

On Friday, Nov. 7, students will return to Wallace Community College for the robotics competition.

Two teams from the Selma area will earn the chance to visit Auburn University in December to compete in a southwest regional contest.