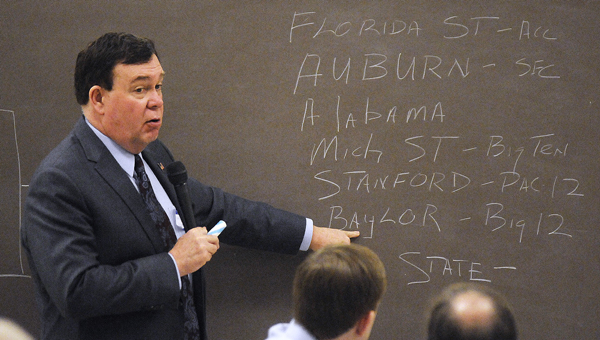 Tony Barnhart from CBS Sports spoke to the Selma Quarterback club during Monday’s meeting at the Carl C. Morgan Convention Center.. Barnhart hosts The Tony Barnhart Show on CBS College Network.. Prior to joining CBS, he wrote for the Atlanta Journal-Constitution for 24 years.

The SEC is getting set for one of its biggest weekends in recent memory, so Monday was a good night for college football analyst Tony Barnhart to speak at the Selma Quarterback Club.

Barnhart, nicknamed “Mr. College Football” after decades covering the sport, could hardly hold in his excitement as he talked about the weekend’s upcoming games, which include three games involving top-15 ranked SEC teams facing one another. Alabama will take on Mississippi, Auburn hosts LSU and Texas A&M will battle Mississippi State.

“On paper, this is the best weekend I’ve ever seen,” Barnhart said. “We’ve got six top-15 teams and they are all playing each other. It’s the biggest weekend ever in the state of Mississippi.”’

But it’s not just this weekend that has Barnhart excited. It’s this season, with the SEC West race wide open and the first college football playoff awaiting at the end of the year.

“Sooner or later they are going to figure me out, and I’m going to have to get a real joke,” Barnhart joked. “But I’ve got 38 years, and I’ve got to be honest with you — I’ve been more excited about this season than any season in a long time.”

Barnhart has hosted the Tony Barnhart Show on CBS College Network and has an afternoon radio show on Atlanta’s 790 “The Zone.” He also works for the SEC Network. He graduated from the University of Georgia so he understands how the game of football resonates in this part of the country.

During Barnhart’s career, he’s seen college football grow from a regional sport into one that resonates nationally. He worked through the BCS era and now he’s ready to see what the college football playoff can do to grow the sport.

“What the BCS did was make everybody in the country pay attention to what everybody else was doing,” Barnhart said. “It turned college football from a strong regional game into an incredibly national game.”

Barnhart spent part of his time speaking by breaking down the new playoff system on a blackboard in the front of the Carl C. Morgan Convention Center.

Monday night was also father/son-daughter night for the quarterback club. The club will be off next week before meeting Oct. 13 when former Auburn great “Wild” Bill Cody speaks.