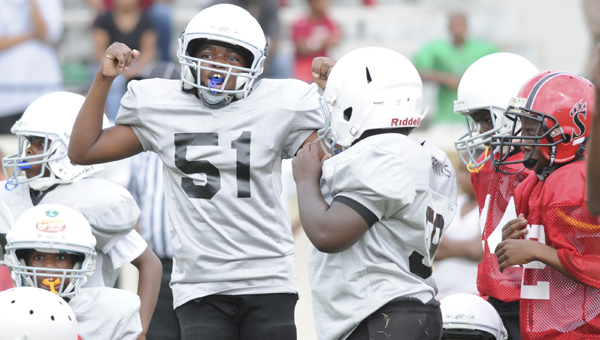 Orrville Seahawks player Antiwan Thomas celebrates a fourth down stop in overtime that gave the Seahawks a 16-8 win over the Colts Saturday at Memorial Stadium. –Daniel Evans

To the joy of hundreds of youth around the city, the Selma Recreation Department’s 2014 youth football season got underway Saturday at Memorial Stadium.

The youth league has 20 teams this year, the most it has ever had, according to football director Terry Jackson. A total of nine games were played Saturday and the first of the season — which was between the Seahawks and Colts — went to overtime.

“I’m glad to see football back, and I couldn’t wait for this day to come,” Jackson said. “We have a good [crowd], and we’ve got 20 teams out here.”

When Jackson took over as football director in 1998, he said there were only six teams in the league. Last year, there were 18 and at this point the league appears to be growing every season. 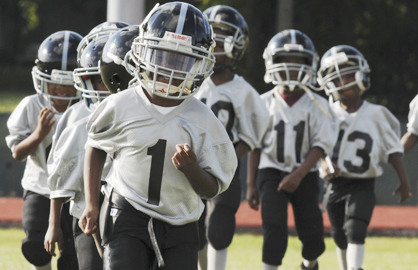 Jordan Lamar leads the Jr. Raiders onto the field as they get introduced Saturday at Memorial Stadium on youth opening day. –Daniel Evans

Jackson credits the addition of teams in Orrville, Marion and Uniontown for the growth this year.

“It is better for us to play outside and getting better participation and better competition,” Jackson said. “It is really nice for Orrville, Marion and Uniontown to come in, and it’s really exciting.”

All of the teams were introduced to the Memorial Stadium crowd Saturday morning before games kicked off. The players lined up across the football field and waved to family and friends.

The start of a new season also means nervous parents like mom Towanna Flennory, were in the crowd.

Flennory said she is happy a new season is underway because her son, Mart’chavious Johnson, has been looking forward to it so long. Plus, she knows all the values he is learning through football.

“It is teaching them how to work together as a team, control his temper, how to work and diversity, how to listen and follow directions — it teaches so much more than just winning and losing,” Flennory said. “There are so many more life lessons involved.”

The four teams that did not play their first games Saturday will start their seasons Monday. The 2014 youth regular season will run through Nov. 10 when the playoffs begin.

Southside gets back on track with win over Wilcox Central