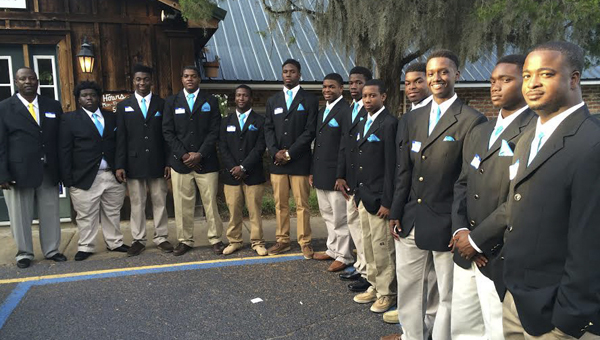 Selma High players and coaches, honored during the first week of the Training Table Program, pose for a photograph in front of the Tally Ho Restaurant.

The Selma City School System is encouraging its high school football team to take its great performance beyond the football field and classrooms with a 10-week Selma High Training Table program.

“I wanted to implement the training table here simply because I knew the benefit that it had on those ball players and the larger community in Phenix City,” DiChiara said.

Once the coaching staff selects players, who have exemplified good behavior, deserving of the Training Table experience, those athletes join an hour-long etiquette training session.

The players are treated to a formal dinner in Selma the following Thursday, where they share a meal with various leaders in the Dallas County area.

The following morning, Training Table participants visit three elementary schools, open car doors for its visitors, introduce themselves to the students, and read and speak to the students.

All of these activities are done while wearing the black blazers and ties provided by Selma City School System.

The community support for the Selma High Training Table has grown since the program first started. DiChiara said he initially asked people to help fund the first couple of training table events, but then the support came pouring in as more and more volunteered to help.

“After the first couple of Training Tables, community members that were there were so inspired by what they saw they came along and said they would like to sponsor one,” DiChiara said. “That’s where the community is to be commended, because this entire event, that will go on for a total of 10 weeks will be paid for totally by sponsors.”

The Training Table program brought an overwhelming joy to Selma High head coach Leroy Miles the moment DiChiara spoke with him about it, because it presented a rare opportunity to expose the players to social skills that will help them through life.

“When they get an opportunity to play at the next level, it won’t be new to them to come down and go to pre-game meal on a college level,” Miles said. “… I wish I could have had that experience at the age level.”

Let’s learn from coach’s near tragedy

It was a simple statement, but a statement that summed up fully the core of a near tragedy. “Had he... read more