The exact amount was not made available, but Selma Mayor George Evans and members of the Selma City Council are saying unpaid sales taxes — totaling in the hundreds of thousands of dollars — could make the difference in what is expected to be a very tight upcoming budget year.

Tuesday, the council approved the city’s 2014-15 budget with level spending from last year and projected revenues that were also based on last year’s amounts. Overall, the budget projects $16.9 million in revenues, compared to $16.8 million in expenses. 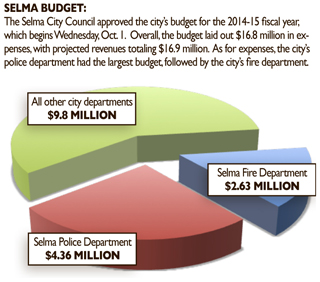 The council’s approval followed a budget hearing earlier in the month, where department’s were asked to scale down their new requests for the new year. In some cases, additional maintenance and needed equipment was delayed in order to keep level funding.

Evans used the city’s public works department as one that would benefit from a budget with stronger revenues.

“What [the public works department] have currently will get them through the year, it just won’t allow them to do any more than what they have normally done,” Evans said. “But, as revenue grows — as sales taxes increase — we can amend the budget and get these departments some of the things they need.”

Council president Corey Bowie, commended the work of the mayor and city department heads in putting together the budget on time, but agreed with Evans that there is work left to be done.

“It was a tough process, a tight budget, but it has been a collaborative effort between the mayor, and the council,” Bowie said. “As a council, and as a city, we are going to have to develop new revenue streams to help meet some of the needs our departments have.”

One such revenue stream is simply collecting the money city records show remains owed from businesses in back sales taxes.

“If we can ever get the money, the back sales tax revenue, that remains owed to us that will put us over the hump,” Evans said.

“We also must work closely with the Alabama Department of Revenue in collecting the back taxes that are owed the city,” Bowie said. “With those monies collected, it would go a long way in providing better services for our citizens.”

Evans has mentioned a reported list of companies the Department of Revenue has identified as owing sales taxes to the city.

In past meetings, Evans has said the amount owed is in excess of $500,000, although the exact figure, and list of those companies has not been made public.

By Alaina Denean The Selma Times-Journal   With domestic violence being such a hot topic in the United States, many... read more