The start of Yeargan Farms took a leap of faith 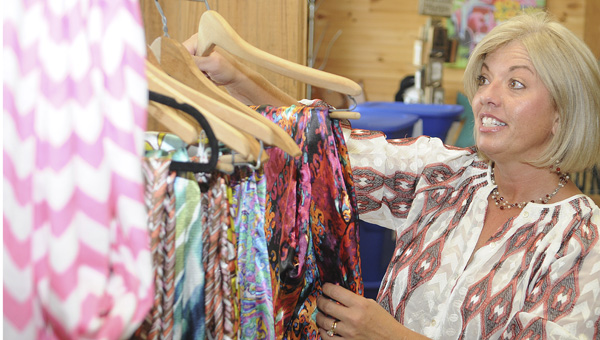 Angie Yeargan sorts out clothing on a rack at Yeargan Farms’ Country Store last week. The store is getting ready for Halloween with a new line of products. (Daniel Evans | Times-Journal)

Angie Yeargan admits that she couldn’t envision what Yeargan Farms would become today when her husband Chuck approached her about the idea over a year ago.

It was a scary thought to cut back on her already successful construction business, Yeargan Construction, to open up a place that only existed in her husband’s mind.

At one point she didn’t know what to do, so she stopped what she was doing and prayed about it right in the middle of her family’s pumpkin patch.

Angie said all she needed was a sign that they were doing the right thing.

A few minutes later the sign appeared in the form of a double rainbow that had emerged in the sky and went from one end of the pumpkin patch to the other.

“When I saw it, I was like OK, I’ve got it,” Angie said. “I knew this would work because that was a pretty clear answer.”

The farm has become a big attraction in Selma.

The pumpkin patch, held every October, has attracted schools from all over the state this year and the farm’s motocross track has been utilized by the Central Alabama Motocross Series several times this year.

But well before the farm became popular, Angie had already proven her ability as a local business owner.

Angie became the owner of Yeargan Construction in 1997 and has been running the company ever since. The company ventured into federal contracting and worked on military bases and veteran affairs hospitals. Eventually, Yeargan Construction branched out to five states, before Chuck and Angie elected to cut back.

Of course, their version of cutting back was opening up Yeargan Farms.

“It became a little overwhelming and we decided we need to take a break,” Angie said.

“We decided we wanted to be home more. We had the farm and we always liked having people out here and always having it open so people could come out and enjoy it.”

So, that’s what they did.

The farm now holds everything from birthday parties to reunions. Angie said there are really endless possibilities and that any event someone wants to happen is possible there.

“We want to turn it into an event venue,” Angie said. “We want to open for booking any kind of event. It doesn’t matter what kind of event they want to have, we can make it happen. If we don’t have it, we are contractors so we can build it.”

A former employee of a housing complex on the 1800 block of Green Street was arrested Saturday for allegedly robbing... read more