Battle of the Bands coming in mid-October 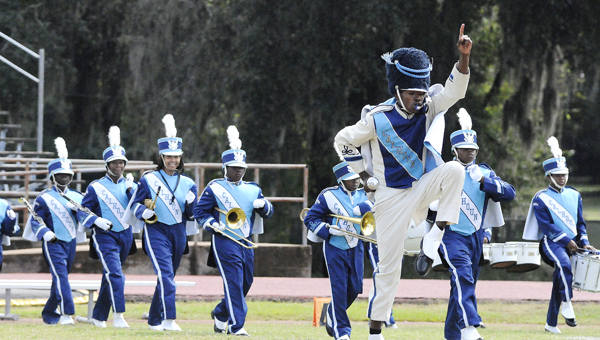 Battle of the Bands will be held Saturday, Oct. 18 at 1 p.m. at Memorial Stadium and will feature 12 to 14 bands. (File Photo | Times-Journal)

The Selma stadium often filled with roaring sports fans during the football season is expected to attract a thunderous crowd of band supporters next month for the 2014 Central Alabama Battle of the Bands.

The Selma High School Marching Saints will host the band competition at Memorial Stadium Saturday, Oct. 18 at 1 p.m. As of Monday, 12 to 14 bands have registered for the statewide battle, event coordinator Oscar Watts said.

There are three judges for the band, one for the percussion, one for the flag core, one for the majorettes and dance line and another for the drum majors, according to Watts.

The bands will be critiqued for musical style, intonation, articulation, uniform marching and much more.

“We just don’t want anyone judging,” Watts said. “Every last one of our judges are experienced musicians, and all of them have been part of some type of band program … We try to get qualified people.”

Bands are separated into different categories based on size, such as 1A, 2A and 3A, according to Selma High band director Brandon Williams.

Various awards are given for each section of the band, such as flag core and percussion, with an overall winner selected for those sections. There is also an overall grand champion, the band with the highest score.

Watts said Battle of the Bands teaches its participants much more than music.

The Selma High marching band will perform but not compete to avoid conflict of interest issues.

Advanced tickets are $8 each, while tickets available at the gate Oct. 18 are $10.

Proceeds from the event will benefit the Selma High band program, which funds uniforms and instruments for the students. With so few area bands set to perform, Watts would like to see the local community show its support by attending the Oct. 18 event.

“I think educationally we’d like to see the community come out and support all of the young people that will be participating,” Watts said.

For more ticket and general information, contact Selma High at 874-1680.