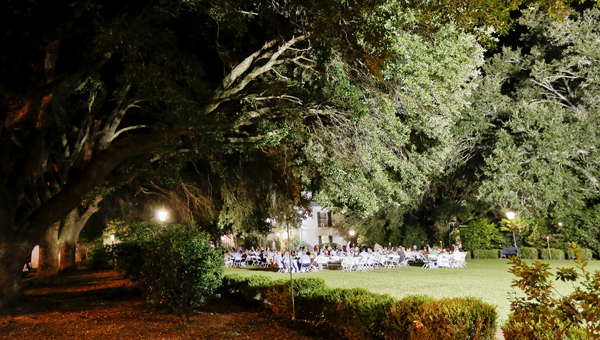 Hundreds of guests turned out for the annual Barbecue on the Green Thursday evening at Sturdivant Hall. The event is the primary fundraiser for the iconic home and museum in Selma’s Old Town.–Alaina Denean

The fundraiser had a large crowd Thursday night, topping the attendance from previous years.

“I think we have a record crowd and I think the Auburn game had something to do with it,” Sturdivant Hall board member Sandy Greene said.

Guests talked about how good the food was and how nice of an opportunity the event offered good fellowship.

“I come to this event to have a good time and come out and meet and greet and get involved in the Selma community,” guest Benjamin Rich said.

Proceeds from the event raises money for Sturdivant Hall, an iconic museum and reception facility in Selma’s Old Town.

“[Barbeque on the Green] is our fundraiser for Sturdivant Hall, it’s out biggest fundraiser to keep it open and repaired,” Barbecue chairman Perry Woodruff said.

The committee worked for months to organize the event.

“Everybody chips in, everybody does everything,” Woodruff said, talking about the committee.

They definitely pulled off an event everyone seemed to enjoy.

“It’s such a beautiful atmosphere out here at Sturdivant Hall,” Rich said.

Golden Ranch BBQ once again partnered with Sturdivant Hall to cater the event.

“They’ve got us to do it every year, and it seems to be a success. It gets bigger and bigger every year,” Golden Ranch’s Nick Stevens said. “It’s almost not like work. When I get here it’s fun just seeing everyone enjoy the food and socializing.”

Stevens said it’s an all-day event to prepare the food for the amount of people at Barbecue on the Green.

”We started cooking this morning, and we cooked all day,” Stevens said. “It’s more than doubled in size in seven or eight years.”

Magazine names Jubilee among the top 100 events in 2015

Thousands of visitors walk across the Edmund Pettus Bridge during the 49th anniversary of Bloody Sunday in March. The 50th... read more